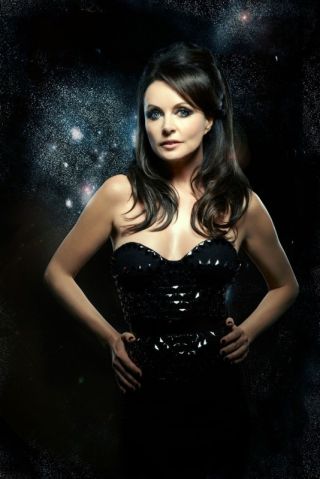 Classical singer Sarah Brightman has reportedly signed up to be the next space tourist.
(Image: © SarahBrightman.com)

British soprano singer Sarah Brightman has announced her plan to ride a Russian rocket into space for a 10-day visit to the International Space Station.

Brightman made her announcement today (Oct. 10) from Moscow during a press conference with Roscosmos (the Russian Federal Space Agency) and Space Adventures, the Virginia firm that brokered the deal.

"Throughout most of my life I've felt an incredible desire to take the journey to space that I have now begun," Brightman said. "A journey into space is the greatest adventure I can imagine."

The singer will be the eighth private citizen to pay her way to space. The last space tourist, Canadian Cirque du Soleil founder Guy Laliberte, flew to orbit in 2009 for about $35 million. Space Adventures is not releasing the cost of Brightman's ticket, but it is almost certainly more than Laliberte's. [Photos: The First Space Tourists]

"The price of the flight is confidential, but it is a roundtrip ticket," said Eric Anderson, chairman of Space Adventures.

Brightman, who rose to fame starring in the original Broadway production of "Phantom of the Opera," said space has influenced her from a young age.

"My music has always been inspired by space," Brightman said. "It was because of seeing the first man on the moon back in the '60s that actually inspired me and gave me the courage to go into the career that I had. At moments when I'm feeling nervous onstage or I'm feeling unsure I actually look to the stars and the planets and space and it gives me courage and inspiration."

Brightman will begin a six-month cosmonaut training regime in Star City, Russia, after she completes a year-long world tour for her new album, "Dream Chaser," starting in January.

"This past July, Ms. Brightman completed and passed all of the required medical and physical evaluations; she's fit and mentally prepared for our spaceflight training program," Alexey Krasnov, head of Roscosmos' Piloted Programs Department, said in a statement. "We will work closely with Space Adventures in supporting Ms. Brightman's spaceflight candidacy."

She will be part of a three-person crew launching on a Soyuz spacecraft from the Baikonur Cosmodrome in Kazakhstan sometime after that. She will spend 10 days aboard the space station, which orbits Earth from 240 miles (386 km) overhead.

"The final scheduling and details of my trip by Soyuz rocket to the International Space Station will be determined very shortly by Roscosmos and the ISS partners," Brightman said.

Now that NASA's space shuttles are retired, Russian Soyuz spacecraft are the only vehicles currently able to carry people to the space station. Since most spots on the capsules are needed to transport professional astronauts and cosmonauts, seats available for tourists have become scarce. However, a new plan for International Space Station crewmembers to begin serving out yearlong missions, rather than their usual six-month stints, has opened up some room on future Soyuz flights.

There is rumored to be a long waiting list of interested millionaires and billionaires ready snatch up these available spots, so Brightman may have had competition for the opportunity.

"I think it speaks for itself the reasons why we would be so honored to have Ms. Brightman fly with us," Anderson said. "This is a very special woman who communicates and can transmit passion and emotion through music. If she is able to take that experience and carry that and communicate that back into the world so that millions of people can experience it, I think that will be a fantastic thing."

Brightman will be working with UNESCO as an Artist for Peace ambassador to use her spaceflight as a tool to inspire people, especially girls and women, to pursue education in science and technology, and to communicate the need for environmental protection, she said.

"I am determined that this journey can reach out to be a force for good, a catalyst for some of the dreams and aims of others that resonate with me," Brightman said.

"When you're up there, Sarah, in the space station looking down on that perfect blue sphere that is Earth, you're not going to see political boundaries, you're going to see one perfect Earth that was created for everybody," said Neil Ford, UNESCO's director of public information.

Brightman isn't the first musician to pursue spaceflight. Former 'N Sync band member Lance Bass underwent cosmonaut training in Russia in 2002 in preparation for a trip on the Soyuz planned for that year. However, his funding, which was based on a plan to air a documentary of his training and voyage, fell through and he never flew.

When she launches, Brightman will be the first recording artist to travel to Earth orbit.

The first space tourist to fly, American investor Dennis Tito, made his trip in 2001 for a reported $20 million. Since then, six other people have brokered trips through Space Adventures to ride on Russian spacecraft to the space station. One of them, Hungarian-American computer software billionaire Charles Simonyi, flew twice, in 2007 and 2009.