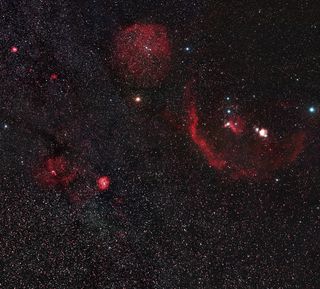 Josh Knutson took this 7-tile mosaic image of the constellations Monoceros and Orion from his backyard in Rio Rancho, New Mexico on May 25, 2011. He used a T1i modified DSLR camera, 50mm lens at F/4.0, ISO 800 on a Vixen Polarie tracker. Mosaic alignment and stitching was handled by Robert Farrimond and post-processing by Salvatore Grasso.
(Image: © Josh Knutson / http://daemongpf.blogspot.com/ )

The constellations Monoceros and Orion come into stunning focus in this widefield image of the night sky.

Photographer Josh Knutson took this 7-tile mosaic image from his backyard in Rio Rancho, New Mexico on May 25, 2011. Each tile represents one hour's worth of two-minute exposures stacked on top of each other.

Monoceros, known as the unicorn, is a dim constellation bordered by Orion, Gemini and Hyrda. It lies above the bright star Sirius, yet it has no bright stars of its own. Orion is a well-recognized constellation that ancient astronomers dubbed the Hunter.

One of the most prominent stars in Orion is Betelgeuse, a red supergiant with an apparent magnitude varying between 0.2 and 1.2. On this scale, smaller numbers represent brighter objects, with the dimmest objects visible to the human eye at about magnitude 6.5.

Knutson used a T1i modified DSLR camera, 50mm lens at F/4.0, ISO 800 on a Vixen Polarie tracker to take the photos. The mosaics were aligned and stitched by Robert Farrimond, with post-processing by Salvatore Grasso.