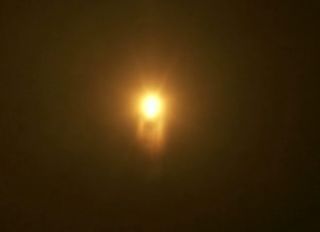 This screenshot shows a plume billowing from the base of SpaceX's Falcon 9 rocket about 79 seconds into its launch on Oct. 7, 2012. The Falcon 9 successfully delivered SpaceX's robotic Dragon capsule to orbit on the first bona fide private cargo mission to the International Space Station.
(Image: © NASA TV)

SpaceX's Falcon 9 rocket detected an anomaly in one of its nine first-stage engines 79 seconds into the flight, which kicked off the first-ever bona fide private cargo mission to the International Space Station. The engine apparently lost pressure suddenly, at which point the Falcon 9 issued an engine shutdown command, officials said.

"We know the engine did not explode, because we continued to receive data from it," SpaceX officials said in an update released Monday (Oct. 7). "Our review indicates that the fairing that protects the engine from aerodynamic loads ruptured due to the engine pressure release, and that none of Falcon 9’s other eight engines were impacted by this event."

The Falcon 9 rocket then computed a new ascent profile and got Dragon into the proper orbit, officials said. The unmanned capsule is slated to rendezvous with the space station Wednesday morning (Oct. 10) as planned. [Photos: Dragon Launches on 1st Space Station Cargo Trip]

Skywatchers in parts of North America should be able to see Dragon as it chases down the orbiting lab on Monday and Tuesday evenings (Oct. 8 and 9). The two spacecraft will look like stars streaking across the twilight sky.

The Falcon 9 is designed to withstand such an engine loss and still complete its mission, SpaceX officials said. In this feature it's similar to NASA's huge Saturn 5 rocket, which launched astronauts to the moon during the agency's Apollo program. The Saturn 5 lost engines on two separate flights but still did its job.

The Dragon capsule is carrying about 1,000 pounds (454 kilograms) of supplies and scientific experiments on the first of 12 scheduled supply flights that California-based SpaceX will make to the orbiting lab under a $1.6 billion NASA contract. Dragon will stay docked to the station until Oct. 28, when it will return to Earth with a load of experiments and station hardware.

"We will continue to review all flight data in order to understand the cause of the anomaly, and will devote the resources necessary to identify the problem and apply those lessons to future flights," company officials said in today's update. "We will provide additional information as it becomes available."

Editor's Note: If you snapped an amazing photo of Dragon's launch on Sunday or spot the spacecraft in orbit and would like to share the picture for a story or gallery, send images and details (including viewing location) to managing editor Tariq Malik at tmalik@space.com.