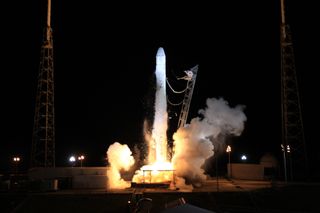 SpaceX's robotic Dragon capsule lifts off the pad atop the company's Falcon 9 rocket on Oct. 7, 2012, kicking off the first-ever bona fide supply run for a private American spaceship.
(Image: © SpaceX)

CAPE CANAVERAL, Fla. – A privately built rocket lit up the night sky over Florida Sunday (Oct. 7) to kick off the first-ever cargo delivery trip to the International Space Station by a robotic, American-made spacecraft.

The mission is the first of a dozen SpaceX cargo flights under a $1.6 billion deal with NASA for its Commercial Resupply Services program. This flight, being the first mission, is dubbed SpaceX CRS-1 and is expected to arrive at the orbiting lab on Wednesday morning (Oct. 7).

NASA space station program manager Mike Suffredini said Dragon's ability to launch supplies to the station and return cargo back to Earth is a cornerstone of boosting scientific research on the orbiting laboratory, as well as its day-to-day maintenance.

"Not to be overdramatic, but it's critical to the International Space Station," Suffredini said during the countdown to launch. [Photos: Dragon Launches on 1st Space Station Cargo Trip]

Sunday night's launch was nearly flawless. One of the Falcon 9 rocket nine engines apparently shut down unexpectedly during the ascent, but the booster's eight other engines compensated for the glitch and delivered the Dragon spacecraft into its intended orbit, SpaceX President Gwynne Shotwell said after the flight. The rocket is designed to do exactly that in the event of an engine anomaly, she added.

When NASA retired its space shuttle fleet in 2011, it marked the first time in 30 years that the United States did not have an American spacecraft capable of flying missions to and from low-Earth orbit. NASA is relying on the availability of new private space taxis to deliver U.S. supplies, and ultimately astronauts, to the International Space Station.

Currently, the U.S. space agency depends on Russian Soyuz spacecraft to ferry crews to the station, and sends cargo on various robotic spacecraft operated by space agencies in Russia, Japan and Europe. But those unmanned space freighters are not designed to return science experiments and other station gear back to Earth. Instead, the spacecraft are disposed of in Earth's atmosphere by burning up during re-entry.

That is where Dragon stands out.

The gumdrop-shaped spacecraft is designed not only to haul cargo to the International Space Station but also to return hardware and experiments back to Earth. Under its terms with NASA, SpaceX has pledged to launch at least 20 metric tons of supplies to the space station during its 12-flight deal.

In May, the Hawthorne, Calif.–based SpaceX launched a test flight to the station using a different Falcon 9 rocket and Dragon capsule to prove that it was ready to begin making bona fide supply runs. The demonstration was a success, paving the way for Sunday night's launch.

"Every time we fly, we learn something," Shotwell said before launch. "We're a launch company; I'm excited every time we get to launch."

For the first operational Dragon cargo mission to the station, SpaceX and NASA packed the capsule with more than 1,000 pounds (454 kilograms) of supplies, food and other vital gear for the station's current three-person Expedition 33 crew. Those supplies include a special delivery of ice cream for the astronauts, a late addition packed as a special treat.

The Dragon capsule will pull up to the station on Wednesday and be grappled by astronauts using the outpost's robotic arm so it can be attached to an available docking port. After nearly three weeks at the space station, Dragon will undock for a planned Oct. 28 splashdown in the Pacific Ocean off the coast of Southern California, where it will be retrieved by a SpaceX recovery crew. [6 Fun Facts About SpaceX's Dragon Spacecraft]

The space station's three-person crew watched SpaceX's smooth Dragon launch live via a video feed beamed up by flight controllers. At the time of launch, the station was sailing 225 miles above Tasmania, NASA officials said.

"We are ready to grab Dragon!" the station's commander, U.S. astronaut Sunita Williams, radioed down to Mission Control at NASA's Johnson Space Center in Houston along with congratulations for the SpaceX team.

NASA also confirmed today that a piece of space junk that will fly near the station Monday won't interfere with the crew's work preparing for Dragon's arrival, agency officials said.

The Dragon capsule is expected to return more than 2,000 pounds (907 kg) of science experiment results and station hardware so they can be studied or — in the case of the hardware — upgraded or repaired, station managers said.

SpaceX's Dragon capsules are 14.4 feet tall (4.4 meters) and about 12 feet wide (3.6 m). They rely on two solar panels for power, making them the first American solar-powered spacecraft to visit the International Space Station.

SpaceX has also received NASA funding to develop a manned version of Dragon as part of the agency's private space taxi efforts. Building a vehicle capable of carrying astronauts into space has long been a goal of SpaceX CEO Elon Musk, the billionaire entrepreneur who founded the company in 2002.

Shotwell said SpaceX expects to be ready to fly astronauts on Dragon spacecraft by 2015.

SpaceX is one of two companies with a NASA contract to provide unmanned cargo delivery flights to the space station. The other firm is the Virginia-based Orbital Sciences Corp., which has a $1.9 billion deal for at least eight resupply flights to the station using its new Antares rocket and Cygnus spacecraft. Unlike Dragon, Orbital's Cygnus is not designed to return supplies to Earth.

The first Antares rocket test flight is expected later this year from a launch site in Virginia.

Editor's Note: If you snap an amazing photo of SpaceX's launch of its Dragon capsule on Sunday, or spot the spacecraft in orbit, and would like to share it for a story or gallery, send images and details (including launch viewing location) to managing editor Tariq Malik at tmalik@space.com.