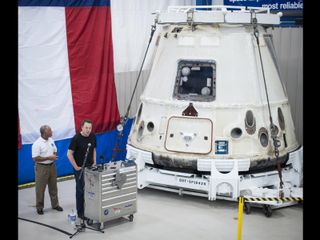 NASA Administrator Charles Bolden (left) and SpaceX CEO Elon Musk view the historic Dragon capsule that returned to Earth on May 31 following the first successful mission by a private company to carry supplies to the International Space Station. This picture was taken June 13, 2012 at a SpaceX facility in McGregor, Texas.
(Image: © NASA/Bill Ingalls)

As a new fleet of private spaceships prepare to take flight by 2015, the age of commercial spaceflight may be just around the corner.

With the idea of space vacations no longer the stuff of science fiction, the rise of commercial spaceflight could be a crucial game changer for the aerospace industry. NASA is expecting to purchase seats aboard private space vehicles to ferry astronauts to and from the International Space Station.

This type of high-profile paradigm shift may be just the kind of excitement that is needed to inspire the next generation of engineers, scientists and space explorers, according to Paul Kostek, former president U.S. division of the Institute for Electrical and Electronics Engineers (IEEE-USA), a professional society dedicated to furthering engineering and technological innovation.

SPACE.com recently spoke to Kostek, who is currently the president of the IEEE Aerospace & Electronics Systems Society, about how commercial spaceflight could boost interest in the so-called STEM careers (ones in science, technology, engineering and math), and why this is all good news for society.

SPACE.com: What do you see as the greatest possibilities for the commercial spaceflight industry? What excites you the most about these changes?

Paul Kostek: The positive thing that I see about commercialization is that it's bringing back a level of excitement that the space program hasn't had in a very long time. Take SpaceX for example, this is not really a garage operation — there's a lot of money involved — but it's their own money.

SPACE.com: How do you think commercial spaceflight will affect STEM education?

Kostek: Once SpaceX's Dragon missions start going, and once Richard Branson's [Virgin Galactic] group starts doing actual flights, these types of things will bring people into the STEM field. Even if they don't end up directly in the aerospace world, it will generate that type of excitement.

Back when we landed on the moon, I was a 12-year-old kid, and now I've gotten to be a part of this world. This is what we're going to have over the next few years: that excitement level where people look at this and go: I want to be part of this. This is kind of what's been missing.

I think even with the space shuttle, it flew up and went to the space station, but there wasn't really a sense of: where is this going to go next? The commercial side is really wide open. Once they start traveling with tourists, they can build off of that, and it allows NASA to focus on longer-term projects. Altogether, it will feed into getting people excited again about the cool things that people can do out there in the STEM world.

SPACE.com: What are some misconceptions with STEM education that you see?

Kostek: You have to look at engineering from its simplest description, which is problem solving. Once you define a problem, the second challenge is to solve it. But, some of the biggest problems and needs in the world are not always the super complex things. [8 Celebs Who Promote Science]

I'm involved in a lot of projects where people are going to places in Africa and India to work on projects, like how to get a village power, running water or electricity. There are lots of simple things that people can use their skill base to make a difference.

SPACE.com: What's the most challenging thing about promoting STEM education?

Kostek: People are intrigued by space, but I think sometimes, like anything else, it's about how you keep it exciting. How do you keep it interesting? My associates in the space world would say: it just is. But for the average person, there's a lot going on in life.

But we've seen over the years that space intrigues people. We have rovers on Mars that people are just fascinated by. There's still an urge to know more about what's going on outside the realms of our own planet, so space still attracts people.

SPACE.com: What do you find are the greatest barriers for young folks interested in pursuing STEM careers?

Kostek: It's always perceived as hard, and maybe people like to sell it that way. There's this sense that if you don't understand mathematics, you're doomed. But most people are smart enough to figure out the math.

Sometimes we make it sound so hard, and it makes some people think that they can't possibly do it. It's almost a question of telling people that this can be fun, that they shouldn't be scared of it. Sure, there are challenges with studying mathematics and sciences, but you can make it work.