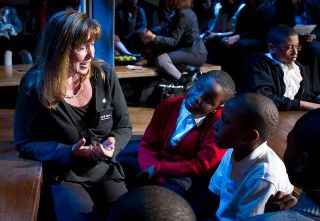 NEW YORK – More than 200 students gathered today (March 22) to get a taste of space directly from NASA and an astronaut in orbit.

"One of our greatest responsibilities at NASA is inspiring the next generation of explorers to work hard and pursue their dreams," Garver said. "And it is my hope that some of those dreams include careers in science and engineering."

The students were also treated to a special appearance by astronaut Cady Coleman, who is currently orbiting 226 miles (363 kilometers) above Earth on the International Space Station. Coleman answered questions from the audience via satellite video link about life in space, and encouraged all the youngsters to work hard and follow their dreams.

"When you're thinking about what you'd like to be, you can be anything," Coleman said. "I sincerely believe that. And you don't have to know what it is yet, but this is the time to get ready. By coming to an event like this, you're getting ready."

Since March is Women's History Month, the forum was particularly aimed at empowering the young women in attendance. [Top 5 Myths About Girls, Math and Science]

Melvin spoke about the value of these collaborations and the importance of promoting science, technology, engineering and mathematics – the so-called STEM subjects.

"The primary focus of NASA's education mission is to use the excitement and wonder of our programs to ignite a spark for all students to follow STEM studies that can lead to exciting career options," Melvin said. "By collaborating with organizations like Urban Zen and FFAWN, whose missions are aligned with ours, we can identify and reach out to students who may not otherwise realize the opportunities that are available. That's important to me and to the agency."

Blige's FFAWN foundation previously teamed up with NASA's Summer of Innovation project to encourage young women to pursue STEM studies, and to demonstrate career possibilities in these fields.

The students at today's forum represented the Women's Academy of Excellence, the Promise Academy, the New York City Housing Authority, and the General D. Chappie James Middle School of Science.