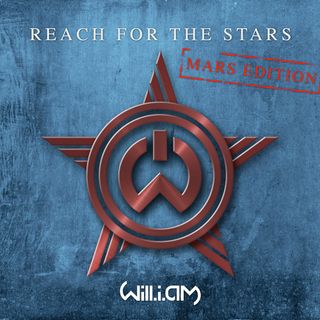 NASA's Mars rover Curiosity has sent back a new type of radio signal from the surface of the Red Planet: pop music.

On Tuesday (Aug. 28), the car-size rover broadcasted the world — or rather, because it spanned two planets, worlds — premiere of "Reach for the Stars,"a new song by Black Eyed Peas' rapper will.i.am. It marked the first time that music (of any type) was radioed from another planet and only the second time that the human voice was sent, only preceded by a message from NASA's chief received the day before.

"Reach for the Stars," which will.i.am said was backed by an orchestra to demonstrate "human collaboration," begins with the lyrics:

The song made its interplanetary debut at an educational event hosted by NASA's Jet Propulsion Laboratory (JPL) in Pasadena, Calif., which hosts mission control for the Mars rover Curiosity. Flight director Bobak "Mohawk Guy" Ferdowsi, whose haircut drew worldwide attention the night the rover landed, triggered the song's playback after it was beamed back the 150 million miles (240 kilometers) that separates Earth and Mars.

"I never thought in a billion years a song would hitch a ride on a rocket and when it lands on Mars it would be beamed back to Earth. But that's what's poppin' off," will.i.am said in a video released before the event.

The rapper said he wrote the song to reflect his passion for science, technology and space exploration. The song's lyrics are a message to today's youth, to encourage and remind them just how important their involvement in the sciences is, he said.

"If you ask kids right now, a lot of them do not want to be scientists, engineers and mathematicians," will.i.am told collectSPACE on the evening Curiosity landed on Mars. "They want to be athletes and celebrities." [Mars Rover Curiosity's Landing Day at JPL (Photos)]

Today's generations might dismiss scientists urging them to take an interest in their work, he said, but kids are more likely to listen to an entertainer with a message, especially if that message can help them follow in his footsteps.

To emphasize his point, will.i.am involved children in the production of "Reach for the Stars."

"We have a kids' choir singing the verse," he said in a recorded statement. "The original song had me singing the verse but I thought it'd be awesome to put kids, because right now technology is moving so fast, but education for the youth has been slowed down."

Can't nobody hold us back, they can't hold us down. They can't keep us trapped, tie us to the ground. We told you people that we don't mess around. When we turn it up, please don't turn it down.

"I wrote it with me saying it, but I want kids to reinterpret it to address the need that we need in America right now," will.i.am explained. "These ten year olds, when they turn 30 what are they going to be doing? What skills are they going to have to even compete tomorrow?"

To that end, will.i.am used Tuesday's event to announce a science, technology, engineering, arts and mathematics (STEAM) initiative that features NASA projects, including the Curiosity rover. The outreach program is a partnership between the singer's i.am.angel Foundation and Discovery Education, which offers digital resources to kindergarten through grade 12 classrooms.

"It is my new mission now," will.i.am said, "to use music, to use my career to inspire this youth in America."

"Reach for the Stars" was the first song transmitted from another planet, but the first words from the surface of Mars came down on Monday (Aug. 27).

In spoken words radioed to the rover on Mars and back to NASA's Deep Space Network on Earth, Charles Bolden, NASA's Administrator and a former astronaut, noted the difficulty of landing a rover on Mars, congratulated NASA employees and the agency's commercial and government partners on the successful landing of Curiosity, and said curiosity is what drives humans to explore.

"Curiosity will bring benefits to the Earth and inspire a new generation of scientists and explorers, as it prepares the way for a human mission in the not too distant future," Bolden said in the transmitted message.

The first words — and song — from Mars arrived on Earth just days after the Aug. 25 passing of Neil Armstrong, the first man to walk on the moon. His first words proclaimed his "small step" a "giant leap for all mankind."

"With this voice, another small step is taken in extending human presence beyond Earth, and the experience of exploring remote worlds is brought a little closer to us all," Dave Lavery, NASA's Curiosity program executive, said in a statement. "As Curiosity continues its mission, we hope these words will be an inspiration to someone alive today who will become the first to stand upon the surface of Mars."

"And like the great Neil Armstrong, they will speak aloud of that next giant leap in human exploration."

Click through to collectSPACE to listen to will.i.am’s “Reach for the Stars” song as broadcasted from Mars.