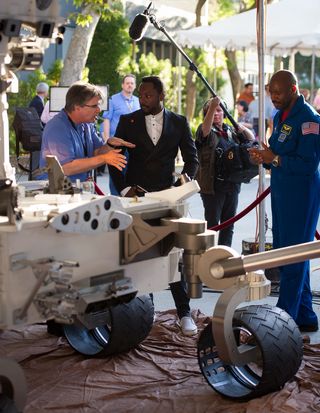 Musician Will.i.am, center, listens to NASA scientist Jim Garvin of the Goddard Space Flight Center talk next to a mock up of the Mars Science Laboratory rover Curiosity as astronaut Leland Melvin looks on at the Jet Propulsion Laboratory (JPL) a few hours ahead of the planned landing of the Curiosity rover on Mars, Sunday, Aug. 5, 2012 in Pasadena, Calif.
(Image: © NASA/Bill Ingalls)

PASADENA, Calif. — The celebrities are turning out in force for the Mars rover Curiosity's nail-biting landing attempt tonight (Aug. 5).

Actor Morgan Freeman and director Barry Sonnenfeld ("Men in Black," "Get Shorty") are among the VIPs on hand here at NASA's Jet Propulsion Laboratory (JPL), which manages Curiosity's mission, to watch the ambitious and unprecedented touchdown attempt.

The 1-ton Curiosity rover is slated to land inside the Red Planet's Gale Crater by 10:31 p.m. PDT tonight (1:31 a.m. EDT and 0531 GMT on Monday), after a harrowing series of maneuvers that culminates in the robot being lowered to the Martian surface on cables by a rocket-powered sky crane. Such a move has never been attempted before on the surface of another planet.

If all goes well, the $2.5 billion rover will spend the next two years or more exploring the Gale area, attempting to determine if the region can, or ever could, support microbial life.

Here are the other big-name folks who came to JPL for the landing, according to a list provided by the lab. Many of them work in film and TV, which isn't surprising given JPL's proximity to Hollywood:

— Wil Wheaton, actor and writer ("Star Trek: The Next Generation," "Stand by Me")

Some political higher-ups are also here, including NASA chief Charles Bolden and John Holdren, director of the White House Office of Science and Technology Policy, JPL officials have said.

Former Apollo astronaut Neil Armstrong, the first man on the moon, doesn't appear to be here, according to JPL's list. But today is his 82nd birthday, and the Curiosity team hopes they can deliver something of a present to the moonwalker.