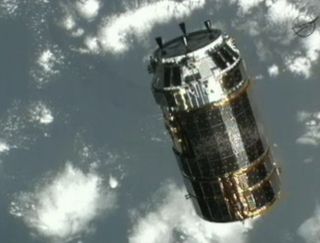 The third in a series of robotic Japanese spaceships has safely arrived at the International Space Station today (July 27), bearing a delivery of food, equipment and student science experiments for the orbital outpost.

The unmanned, school bus-size H-2 Transfer Vehicle-3 (HTV-3), also called Kounotori 3 ("White Stork" in Japanese), flew to about 40 feet (12 meters) away from the ISS, where it was grabbed at 8:23 a.m. ET (1223 GMT) by the space station's 58-foot long (18 m) robotic arm, which was controlled from inside by astronauts Joe Acaba of NASA and Aki Hoshide of JAXA (the Japanese Aerospace Exploration Agency).

"I think we couldn’t have had a better day and we're looking forward to a great HTV mission," Capcom Cady Coleman told the astronauts from Mission Control in Houston.

Today's arrival follows the failed docking attempt on Monday (July 23) of an unmanned Russian Progress spacecraft. The Progress 47 craft was testing a new rendezvous system, which apparently failed to work as planned. The vehicle, which had already been at the space station, had undocked in order to test the new system in a re-docking. Russia plans to try again on Sunday (July 29) to dock the Progress 47.

Kounotori launched atop a Japanese H-2B rocket from the Tanegashima Space Center in southern Japan on July 20. It is the third such vehicle launched from Japan, following the flights of HTVs 1 and 2 in September 2009 and January 2011, respectively. [Photos: Japan Launches 3rd Robotic Supply Ship to Space Station]

The spaceship is loaded with 4 tons (3,600 kg) of cargo, including care packages with food, clothing and other items for the space station's crew. The vehicle, which is 33 feet (10 m) long and 13 feet (4 m) wide, is also carrying a camera called the ISERV (International Space Station SERVIR Environmental Research and Visualization System).

The camera is to be installed on the station, for use by ground-based scientists who can manipulate it via remote control. The system is intended for studies of natural disaster sites and environmental issues on Earth.

Two student-designed experiments are also packed aboard Kounotori 3. These projects won the YouTube Space Lab competition, which allowed students between the ages of 14 and 18 to envision space station experiments and describe them in videos submitted to YouTube. The winners were chosen by public voting.

Amr Mohamed, 18, of Alexandria, Egypt, and Dorothy Chen and Sara Ma, both 16, of Troy, Mich., came out on top, with experiments investigating how microgravity affects the hunting strategy of zebra spiders, and how different nutrients and compounds affect the growth and virulence of bacteria grown in space, respectively.

While Mohamed elected to experience cosmonaut training in Star City, Russia, for his prize, Chen and Ma chose to watch their projects launch aboard Kounotori 3 July 20 from the Tanegashima Space Center.

Six astronauts currently live aboard the $100 billion, football field-size space laboratory. They hail from the United States, Russia and Japan.

Kounotori 3 is just one of a fleet of unmanned cargo delivery spacecraft that carry supplies to the space station. Russia and Europe have each built and launched similar robotic vehicles, and a commercial U.S. spacecraft, Dragon from California company SpaceX, has recently entered the field with its first visit to the station in May.