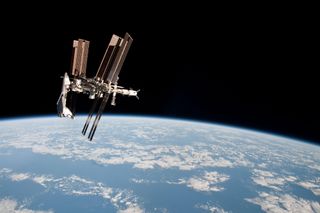 NASA's space shuttle Endeavour appears to hang off one end of the International Space Station in this photo taken by an astronaut aboard a nearby Soyuz spacecraft on May 23, 2011 during Endeavour's final mission. It is one of the first-ever images of a space shuttle docked at the space station.
(Image: © NASA)

DENVER — It's time to get serious about science in space, and the International Space Station is the perfect place to start, NASA officials said Tuesday (June 26).

"We are in a position in space research and space exploration where we have to push the ball and advance forward or we're about ready to retreat from space," William Gerstenmaier, NASA's associate administrator for human exploration and operations, told a crowd of researchers here at the first annual ISS Research and Development Conference.

Science experiments on the space station have been under way since the outpost's early days, of course. Construction of the orbiting laboratory began in 1998, and there has been a continuous human presence on the station since 2000. Now, however, there is little left to build and many opportunities to exploit, according to NASA speakers, who encouraged scientists to spread the word.

"We need to really reach out and push and use that same creativity and innovation that we used to build this wonderful facility to actually utilize it," Gerstenmaier said. [Infographic: The International Space Station Inside and Out]

In May, SpaceX's unmanned Dragon capsule successfully docked with the space station, becoming the first commercial spacecraft in history to do so. With SpaceX and other private companies providing transportation, private research companies will have the routine access they need to commit to space research, Gerstenmaier said. Meanwhile, upgrades like Earth-compatible power outlets and wireless internet connectivity will make it easier for terrestrially bound scientists to create experiments that will work in space, said Mike Suffredini, NASA's ISS Program Director.

The human component to space exploration was at the forefront in NASA officials' messages. Human experimenters can be part of experiments, making observations in a way that an automated system never could, said NASA Chief Scientist Waleed Abdalati. And human perseverance can also yield surprising results.

For example, now-retired astronaut Shannon Lucid was once conducting a fluid physics experiment on the Russian research satellite Mir, Gerstenmaier said. Her job was to shake a container of liquid in an attempt to form a bubble in a certain spot. Based on computer models, researchers were certain that the experiment was physically impossible — but Lucid didn't know that. With communications temporarily interrupted between Mir and Earth, she kept at the experiment for over an hour. Finally, she got the bubble to form.

"It blew away their theory," Gerstenmaier said. "They believed their computer analysis. She didn't know that and really pushed that boundary."

Space station research can have applications for humanity on Earth — one experiment performed on the station uncovered immune system changes that can predict shingles, a painful skin disorder caused by the chickenpox virus, Suffredini said — as well as for future space travel and basic science.

Some instruments on the space station pull double duty. For example, Gerstenmaier said, a particle physics detector called the Alpha Magnetic Spectrometer is designed to detect dark matter and antimatter. But it also detects cosmic rays, providing data that researchers can use to understand how exposure to these rays could affect astronauts during long-term space travel.