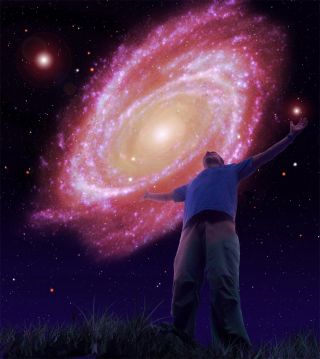 Artist's conception of the Milkomeda galaxy a trillion years from now.
(Image: © David A. Aguilar (CfA))

NASA will reveal new discoveries about the violent fate of our Milky Way galaxy today (May 31), the space agency has announced.

NASA will hold a press conference at 1 p.m. EDT (1700 GMT) Thursday at the agency's headquarters in Washington, D.C. Scientists will discuss new Hubble Space Telescope findings about the inevitable crash of the Milky Way and Andromeda galaxies, which will occur billions of years from now.

"Because of uncertainties in Andromeda's motion, it has not been possible to determine whether the Milky Way will have a head-on collision or glancing blow with the neighboring galaxy billions of years in the future," NASA officials said in a media alert Friday (May 25). "Hubble's precise observations will settle this question."

Several Hubble telescope program scientists and astronomers will participate in Thursday's briefing. They include:

The briefing will air live on NASA TV, which is available here: http://www.nasa.gov/ntv

After the press conference, the panelists will also host a web chat at 3 p.m. EDT (1900 GMT) to answer questions from the public. You can participate in the web chat by visiting this web site: http://www.nasa.gov/connect/chat/M31_collision_chat.html

The Hubble Space Telescope, a joint effort between NASA and the European Space Agency, launched in April 1990 aboard the space shuttle Discovery. In the 22 years since, Hubble has revolutionized the way humanity views the cosmos.

The telescope has been repaired five times over its long life, but it's expected to keep going strong until at least 2014.