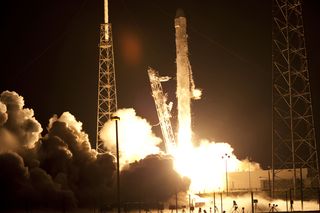 On Cape Canaveral Air Force Station in Florida, Space Launch Complex-40 is ablaze as the SpaceX Falcon 9 rocket lifts off on May 22, 2012.
(Image: © NASA/Rick Wetherington, Tim Powers and Tim Terry)

Dragon blasted off before dawn Tuesday (May 22) from Florida's Cape Canaveral Air Force Station, riding to orbit atop SpaceX's Falcon 9 rocket. The robotic capsule is now chasing down the station, seeking to become the first private vehicle ever to dock with the huge $100 billion structure.

Musk, a billionaire entrepreneur who founded SpaceX in 2002, watched the launch with most of the SpaceX team at the company's Hawthorne, Calif., headquarters, which erupted into cheers as Dragon streaked into space.

"There's so much hope riding on that rocket," Musk told reporters Tuesday during a post-launch press conference. "So when it worked — and Dragon worked, the solar arrays deployed and people saw their handiwork in space operating as it should — it was tremendous elation." [Launch Photos: SpaceX's Dragon Blasts Off for Space Station]

"For us, it's like winning the Super Bowl," he added.

The liftoff came after years of planning and development — and three days after a faulty rocket engine valve scrubbed a previous launch attempt. Musk said the prospect of another valve problem weighed on his mind a bit, as did myriad other potential issues.

But Tuesday's picture-perfect liftoff chased away any negative thoughts.

"Every bit of adrenaline in my body released at that point. It's obviously an extremely intense moment," Musk said. "Anything could have gone wrong, and everything went right, fortunately. So I feel very lucky."

Dragon's flight is a demonstration mission, to see if the capsule and the Falcon 9 are ready to begin a series of 12 robotic supply runs to the space station for NASA. The space agency is encouraging the development of Dragon and other American commercial vehicles to fill the cargo- and crew-carrying void left by the retirement of the space shuttle fleet in July 2011.

Dragon will spend the next few days chasing down the orbiting lab and demonstrating that it has the ability to approach it closely without endangering the station or its six astronaut occupants. If all goes well, two station crewmembers will grab the capsule with the orbital outpost's robotic arm on Friday (May 25), then berth it to the Harmony node.

Dragon will spend about a week attached to the space station. During this time, crewmembers will offload the capsule's about 1,200 pounds (544 kilograms) of supplies, then load it up with material for the trip back to Earth. Dragon is slated to depart on May 31, when it will make a splashdown in the Pacific Ocean and be recovered by SpaceX personnel off the California coast.

If Dragon performs well during the 10-day mission, the first of SpaceX's contracted cargo flights to the station could lift off later this year, company officials have said.