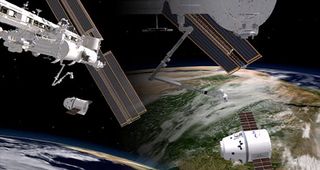 This NASA illustration shows the Dragon spacecraft approaching the ISS. The mission is scheduled for May 2012.
(Image: © NASA)

With the launch of the first privately built spacecraft to the International Space Station just days away, the commercial spaceflight industry is on the verge of a defining moment.

Hawthorne, Calif.-based SpaceX is slated to launch its unmanned Dragon capsule to the space station on Saturday (May 19) from the Cape Canaveral Air Force Station in Florida. The demonstration flight will test the spacecraft's ability to haul cargo to and from the orbiting outpost. If successful, SpaceX will become the first company to rendezvous and dock a privately built vehicle to the space station.

"It is, by all accounts, an important step, bordering on a giant leap for commercial spaceflight," Michael Lopez-Alegria, president of the Commercial Spaceflight Federation, told reporters in a news briefing today (May 17).

Lopez-Alegria was joined by NASA deputy administrator Lori Garver and Jeff Greason, CEO of XCOR Aerospace, which is developing a suborbital space plane for researchers and other paying passengers, to discuss SpaceX's upcoming flight and the future of commercial spaceflight.

"This is a very exciting time to be involved with the U.S. space program," Garver said. "We're starting to write the next chapter. We are at a brink of a milestone moment in our space history with the upcoming SpaceX launch." [Photos: SpaceX Set for Historic Launch]

The flight is part of NASA's Commercial Orbital Transportation Services (COTS) program, which aims to nurture the development of a new fleet of private spaceships to carry cargo to the space station. But these efforts are essentially stepping stones for commercial vehicles that will eventually take astronauts to the orbiting complex.

SpaceX intends to use a version of the robotic Dragon capsule for crewed flights to low-Earth orbit. The company is one of several who have submitted proposals for a separate NASA program to receive funding to develop spacecraft to taxi astronauts to and from the space station. NASA plans to announce the companies selected to receive funds in August.

"Although SpaceX's efforts are in today's spotlight, they are but one player engaged in reducing the cost of access to space," Lopez-Alegria said.

But while the upcoming flight of the Dragon capsule is an important milestone, it is important for the industry and members of the public to remember that it is still a test.

"If they get even half of their mission objectives done successfully, that will still be a historic first," Greason said. "Test flights are called test flights for a reason. They very rarely go perfectly."

Successes and failures are both valuable during the testing stage of a vehicle or launch system, Greason said, because they all provide data and lessons to help improve the finished product. He applauded SpaceX for embarking on the ambitious mission and said that he would be tuning to watch the launch.

"I wish them all the success in the world," Greason said. "If they get even halfway there, that's still one for the books."