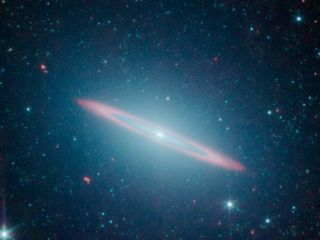 The infrared vision of NASA's Spitzer Space Telescope has revealed that the Sombrero galaxy -- named after its appearance in visible light to a wide-brimmed hat -- is in fact two galaxies in one. It is a large elliptical galaxy (blue-green) with a thin disk galaxy (partly seen in red) embedded within. Previous visible-light images led astronomers to believe the Sombrero was simply a regular flat disk galaxy.
(Image: © NASA/JPL-Caltech)

A famous galaxy shaped like a wide-brimmed hat has revealed a new side of itself in recent photos from NASA's Spitzer Space Telescope. These images suggest that the so-called Sombrero Galaxy straddles the line between two known types of galaxies: blobs and disks.

While most galaxies fall into either camp — blob galaxies are called ellipticals, while disk galaxies are spirals — the Sombrero galaxy appears to be both. This galaxy, officially known as NGC 4594, lies 28 million light-years away in the constellation Virgo.

"The Sombrero is more complex than previously thought," astronomer Dimitri Gadotti of the European Southern Observatory in Chile said in a statement. "The only way to understand all we know about this galaxy is to think of it as two galaxies, one inside the other."

This revelation was only visible through Spitzer's infrared eyes, which look at long-wavelength infrared light that can cut through the dust that hazes visible-light images. This new picture revealed that the Sombrero's glowing halo, which in visible light looked light and small, is actually the right size and mass to be a large elliptical galaxy. [Gallery: The Infrared Universe Seen by Spitzer Telescope]

The researchers describe their findings in a paper published in the Monthly Notices of the Royal Astronomical Society.

"This poses all sorts of questions," said Rubén Sánchez-Janssen from the European Southern Observatory, co-author of the new study. "How did such a large disk take shape and survive inside such a massive elliptical? How unusual is such a formation process?"

The most obvious scenario, that a giant elliptical galaxy swallowed a smaller spiral, is implausible, astronomers say, because the spiral's disk would be unlikely to survive such a violent process. Another possibility is that a cloud of gas descended on an elliptical galaxy, was pulled in by its gravity, and fell into orbit around its center to form a spinning disk.

By teasing out the mysteries of the Sombrero galaxy, astronomers hope to better understand how galaxies form in general, as well as unravel the histories of other oddball galaxies. One such, called Centaurus A, also appears to be an elliptical galaxy with a disk inside it.

In contrast to the Sombrero galaxy, Centaurus A's disk appears to lack many stars. However, scientists suspect that the two galaxies might be similar types, but the Sombrero may simply be older, and Centaurus A might eventually turn out the same way.

The Spitzer Space Telescope launched in 2003, and orbits the sun in an unusual Earth-trailing path. It completed its primary mission in 2009, when its supply of liquid helium, used to cool its electronics, ran out. Now the telescope is operating on an extended "warm" mission. Without the coolant, only two of its instruments are still operable.