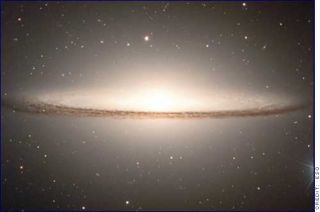 Composite of three images is one of the most detailed ever of the Sombrero Galaxy.
(Image: © ESO)

The owner of a brand new telescope is often baffled as to how to find interesting objects in the sky. They look at the moon and a bright planet or two, but are mystified as to how to locate those beautiful deep sky objects that they've seen so many pictures of.

If you look at a software program like Starry Night, the May skies seem to be full of galaxies, yet finding them with a  small telescope can be a major challenge.

Here is a step-by-step account of how to use your telescope to locate the famous Sombrero Galaxy, Messier 104, in the constellation Virgo.

Beginners often make the mistake of starting out with targets which are a challenge for even an experienced observer. Most deep sky objects are dimmer than any beginner expects, and galaxies are particularly so.

But some galaxies are better targets than others because they have a high surface brightness and a well defined boundary. One such is the Sombrero Galaxy.

Your telescope may have come equipped with setting circles. Truth be told, these are mostly put on beginner's telescopes to make them look "scientific" and are not accurate enough to be of much use. The way most amateur astronomers locate objects in the sky is with a technique called "starhopping." This uses the patterns of bright stars as guideposts to the fainter objects hiding beyond them.

Starhopping to the Sombrero

Download and print out this chart, produced by Starry Night's 3-pane chart feature.

On one piece of paper you will have everything you need to locate this object. Choose a dark moonless night, get out your telescope, binoculars, and a red flashlight, and go galaxy hunting.

The chart is designed to show the sky as you would see it around 10 p.m. on a May evening from anywhere in the Northern Hemisphere. Your initial guide post is the first magnitude star Spica in Virgo. You can easily locate this star by using the curving handle of the Big Dipper.

Follow the arc of the handle across the sky: "arc to Arcturus, then speed on to Spica." Spica is the only bright star in the southern sky at this time of night,

Below and to the right of Spica, look for the four stars which make up the constellation Corvus (the crow): Algorab, Gienah, Kraz and Minkar. These don't look much like a crow, but more like the sail of an old sailing ship. In fact, in Britain they call this "Spica's spanker," the name for the small sail on the back of a ship.

With your binoculars, look at the two northernmost stars of Corvus, Algorab and Gienah -- see the lower left chart. You'll notice that there is a chain of faint stars extending from Gienah upwards and to the left -- this is the path that will lead you to the Sombrero.

At the end of this chain is a triangle of slightly brighter stars, looking like the head on an arrow. Just beyond the tip of the arrowhead is a little asterism (group of stars) which some people call "the stargate," a triangle of stars enclosing a pair of stars. Just beyond that is a tiny arrow of four stars which points exactly at the Sombrero Galaxy. [Use this map.]

While you can see the Sombrero as a tiny smudge of smoke in binoculars, it will look much better in a small telescope.

Practice the starhop a few times in binoculars: from Gienah up the star chain to the big arrowhead, stargate, and tiny arrow. Once you're comfortable with that, follow the same path in your telescope's finder scope, remembering that the image may be inverted. In a small telescope, it will be a larger smudge, slightly oval in shape. In a large amateur telescope, you may be able to see the dark dust band which marks its equator.

If you're new to observing deep sky objects, you may feel a little disappointed at seeing a faint smudge rather than a glowing saucer of stars. But remember that you're seeing this galaxy with your own eyes, seeing photons which have been traveling through space for 65 million years — because the object is 65 million light-years away — and that you are the only person in the universe who will ever see those particular photons!