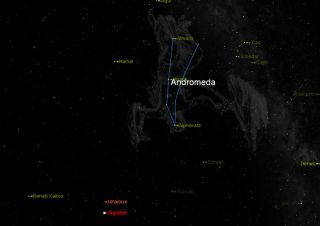 Soon after sunset, as the sky gets dark, look toward the south and you'll immediately notice the brilliant planet Jupiter, but there's another night sky target that also promises a great experience: the amazing Andromeda Galaxy.

Jupiter is a great starting point to find the Andromeda Galaxy. After you find the bright planet, look high above it – almost directly overhead - to find four bright stars. These are the Great Square of Pegasus, the Winged Horse, an unmistakable star pattern, even though it is slightly battered out of true square shape.

Nonetheless, Pegasus is a striking figure and once you see it you won't forget it. [Gallery: Photos of the Andromeda Galaxy]

About midway and above these star strands is the Andromeda Galaxy, one of the most amazing and fascinating of sky objects. It can be seen faintly with the unaided eye, but binoculars and small telescopes promise better viewing.

This sky map shows where to look to see the Andromeda Galaxy over the next week, though clear weather is vital to spot it.

In the year 905 A.D., the Persian astronomer Al Sufi drew attention amidst the stars of the Andromeda constellation to a "Little Cloud," which appeared on star charts long before the telescope was invented in 1609.

If the sky is clear and moonless you can indeed see an elongated hazy patch with your unaided eye about as long as the width of the full moon and half as wide.

Through binoculars and telescopes it remains an elongated patch which gradually brightens in the center to a star-like nucleus. It was listed as object number 31 in Charles Messier's 18th century catalogue of galaxies, nebulas and star clusters, which is why it is known as Messier 31 or M31. We know it better as the Andromeda Galaxy.

The best way to positively find the Andromeda Galaxy is to focus your eyes or binoculars on Alpheratz. Run straight across to the left and get the star Mirach in your field of view.

Then run slowly upwards to a fairly bright star above Mirach and continue to run up in roughly the same direction and same distance. You'll immediately take note of a little patch of faint light.

Please forgive this patch of light for being so faint and tired looking. It's amazing to realize that, as you see it tonight, this light has been traveling some 2.5 million years to reach you (give or take a few hundred thousand years), traveling all that time at the tremendous velocity of about 671 million mph – the speed of light.

The light from that "Little Cloud" is actually the total accumulation of light from over 400 billion stars.

As you look at the Andromeda Galaxy tonight you'll be doing something that no one else in the world except a stargazer can do: You will actually be looking back into the distant past. The light you are seeing is around 25,000 centuries old and began its journey around the time of the dawn of human consciousness.

When it began its nearly 15 quintillion(that's 15, followed by 18 zeros!)mile journey earthward, mastodons and saber-toothed tigers roamed over much of pre-ice-age North America and prehistoric man struggled for existence in what is now the Olduvai Gorge of East Africa.

The Andromeda Galaxy is the most distant object that can be seen with the unaided eye.

M31 has been estimated to be nearly 200,000 light-years in diameter, about 1 1/2 times as wide as our own Milky Way galaxy. Its bright nucleus is the hazy patch that is visible to the unaided eye.

Like our own galaxy, M31 has several attendant satellite galaxies. Two of these: M32 and M110 can be picked out with low magnification in a small-to-medium sized telescope, in the same field of view as M31.

For a very long time, M31 was popularly referred to as the Andromeda "Nebula."

Although big reflecting telescopes, such as Lord Rosse's 72-inch telescope at Birr Castle in Ireland, were in operation during the mid-19th century, it was not seen clearly until 1924, when astronomers Edwin Hubble and Milton Humason used the 100-inch reflecting Telescope at Mount Wilson Observatory to become the first persons to resolve M31 into individual stars.

Yet there were those who many decades earlier suspected that M31 was much more than just a luminous cloud.  Read this prophetic comment out of W.H. Smyth's "A Cycle of Celestial Objects" written back in 1844:

"Sir John Herschel ... concludes that it is a flat ring, of enormous dimensions, seen very obliquely. It consists probably, of myriads of solar systems at a most astounding distance from ours, and affords a distinct lesson that we must not limit the bounds of the universe by the limits of our senses."

This galactic neighbor of ours, the Andromeda Galaxy, is the nearest of all the spiral galaxies to us and one of the largest known.