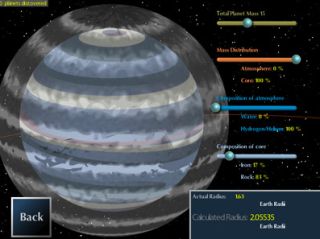 A new app brings thousands of alien worlds to the fingertips of iPhone and iPad users.

The app, called Kepler Explorer, provides interactive displays of the 2,300 alien planet candidates that NASA's Kepler Space Telescope has detected thus far. It's available for free at the iTunes App Store and runs on Apple's iPhone and iPad. It was developed by astronomers, artists and designers at the University of California, Santa Cruz (UCSC).

Kepler Explorer starts with drop-down menus listing the nearly 1,800 Kepler-discovered planetary systems, plus our own solar system, researchers said. Users can select a system, which is then displayed in a view that shows the planet or planets in orbit around their host star.

Users can zoom in and move around the system, and tapping on an individual planet brings it up for further exploration. Another view shows the relative sizes of the planets compared to their host star, researchers said.

Armchair astronomers can also manipulate the composition of the alien planets and their atmospheres, seeing which mixtures of components fit best with Kepler’s observations.

"I have pretty good intuition for what the likely composition of a planet is based on its size, but the app allows anyone to explore the properties of many different planets very quickly," UCSC astrophysicist Jonathan Fortney, who works on the Kepler mission and helped develop Kepler Explorer, said in a statement.

The $600 million Kepler observatory launched in March 2009 to hunt for Earth-size alien planets in the habitable zone of their parent stars, where liquid water, and perhaps even life as we know it, might be able to exist.

Kepler detects alien planets using what's called the "transit method." It searches for tiny, telltale dips in a star's brightness caused when a planet transits — or crosses in front of — the star from Earth's perspective, blocking a fraction of the star's light.

So far, the Kepler mission has discovered 61 confirmed alien planets, along with roughly 2,300 exoplanet "candidates" that await vetting by follow-up studies. Kepler scientists say the vast majority of these candidates — 80 percent or more — should end up being the real deal.

Automatic updates for the Kepler Explorer app will add new planet candidates as they are discovered, researchers said.