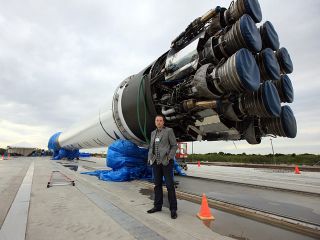 SpaceX's Falcon 9 is being readied for its debut flight in 2010. PayPal co-founder turned rocketeer Elon Musk has backed the venture.
(Image: © SpaceX)

Elon Musk made history in 2010 when his company, SpaceX, became the first to launch a privately built space capsule into orbit and return it safely to Earth. But now, the millionaire-turned-space pioneer has an even loftier goal: to be the first entrepreneur to put an astronaut in orbit.

In an interview with CBS' "60 Minutes" that will air Sunday (March 18), Musk discusses his ambitious future plans and responds to two high profile critics of commercial spaceflight: Iconic Apollo astronauts Neil Armstrong and Gene Cernan — the first and last men to walk on the moon.

Moonwalkers Armstrong and Cernan have been vocal critics of the push to commercialize space. The spaceflyers both testified before Congress to protest against government reliance on private space vehicles, saying that the commercialization of space could threaten America's dominance in space exploration.

In Sunday's interview, which CBS released a preview of Thursday, Musk tells "60 Minutes" correspondent Scott Pelley that Armstrong and Cernan's disapproval was painful to hear.

"I was very sad to see that," Musk tells "60 Minutes" correspondent Scott Pelley. "Those guys are heroes of mine, so it's really tough … I wish they would come and visit … see the hard work that we're doing here and I think that it would change their mind." [Gallery: Dragon, SpaceX's Private Spacecraft]

Following the retirement of its space shuttles last year, NASA is facing a years-long gap in human spaceflight capability, with no American vehicles currently available to launch astronauts into space. Today, NASA relies on Russian spacecraft to ferry astronauts to and from the International Space Station. European, Russian and Japanese unmanned cargo ships keep the station stocked with supplies.

In response, the NASA is looking to the private sector with developing a new fleet of private spaceships to taxi astronauts and other paying customers to and from low-Earth orbit. Musk's SpaceX is one of several companies vying for that government contract.

"I think we are at the dawn of a new era," Musk tells Pelley.

Elon Musk is a billionaire entrepreneur who co-founded PayPal and is also the CEO of Tesla Motors. He founded SpaceX in 2002, and the company is celebrating its 10-year anniversary this year.

Musk, who has invested $100 million into SpaceX, says he is confident that his rocket and capsule will launch an astronaut into space.

"I believe that is the most likely outcome," he says.

SpaceX is scheduled to launch its unmanned Dragon capsule on a demonstration flight to the International Space Station on April 30. If successful, the company will be the first to rendezvous and dock a privately built spacecraft to the orbiting outpost.

During the interview with "60 Minutes," Musk takes Pelley around SpaceX's factory and main headquarters in Hawthorne, Calif. The company employs over 1,000 workers to manufacture and develop its rockets, engines, space capsules and flight software.

In a field that has been dominated for decades by large aeronautical companies, SpaceX is something of an underdog. But Musk isn't worried about that.

"It's like a little kid fighting a bunch of sumo wrestlers. Usually, the sumo wrestlers win," Musk says. "[But] every now and then, the little scrappy company wins and I think this will be one of those times."

One of SpaceX's main goals is to reduce the cost of spaceflight, which will ultimately make exploration beyond our planet more attainable. Musk tells Pelley that this is one of his main motivations, and is also something that is critical to the long-term survival of the human race.

"I think it's important that humanity become a multi-planet species … compared with one where we are forever confined to Earth until some eventual extinction event," Musk says. "That's really why I started SpaceX."