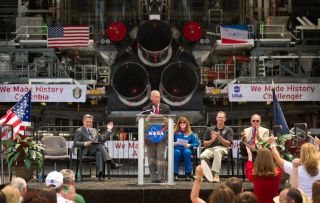 NASA Administrator Charles Bolden announces where four space shuttle orbiters will be permanently displayed at the conclusion of the Space Shuttle Program during an event held at one of the Orbiter Processing Facilities, Tuesday, April 12, 2011, at Kennedy Space Center in Cape Canaveral, Fla.
(Image: © NASA/Bill Ingalls)

COLORADO SPRINGS, Colo. — Some of the biggest hurdles facing NASA's future are the uncertainty surrounding the agency's human spaceflight program after its shuttle program retires, and the policy decisions that have limited its options to build something new while depending on private spaceships, a former NASA chief and other industry experts said Wednesday (April 13).

"Currently, NASA is not permitted to replace the space shuttle with any mode of human transportation," said Michael Griffin, who served as the administrator of NASA from 2005 to 2009. "The decision has been made to acquire it commercially. I'm one of the strongest supporters on record of acquiring human transportation services commercially when that capability becomes extant. But, even when it becomes extant, I do not want to see government capability go away." [NASA's Shuttle Program in Pictures]

Griffin and other space industry experts discussed NASA's future during a panel discussion here at the 27th National Space Symposium. The other panelists included Michael Simpson, president of the International Space University, and George Nield, associate administrator for commercial space transportation at the Federal Aviation Administration.

The most distressing challenge for NASA, the panelists said, is the looming gap in human spaceflight that will be created once the shuttles are no longer available to fly NASA astronauts to the International Space Station. [Thirty Years of NASA Space Shuttle Missions]

The space agency has long been expecting a years-long gap between the retirement of the shuttles and the first operational flights of new private spaceships, which NASA plans to use to ferry crews and cargo into Earth orbit. It will have to depend on Russian, European and Japanese spacecraft to deliver supplies and crews to the International Space Station during the gap between the shuttle fleet's retirement later this year and the new commercial spacecraft.

"We find ourselves in a very unfortunate and rather awkward situation," Nield said. "About 2.5 months from now, after the space shuttle Atlantis completes its final mission, the United States will no longer have the capability to launch its astronauts into space."

NASA has two more shuttle missions planned before its orbiter fleet retires for good. The shuttle Endeavour is due to launch on April 29, with its sister ship Atlantis to fly the final mission in late June.

Not since the six-year gap between NASA's joint 1975 Apollo-Soyuz mission with the Soviet Union and the first shuttle flight 30 years ago — on April 12, 1981 — has NASA had a gap to transition between U.S. spacecraft.  [The Most Memorable Shuttle Missions]

Nield was keen to discuss the potential ways to close the gap between space shuttle retirement and the advent of commercial crew transportation.

"If NASA's commercial crew development program is successful, we will have the opportunity for the first time in our history for the nation to have more than one way to get into space," Nield said. "The goal is to have multiple safe, reliable and cost- effective systems for conducting human spaceflight. If we're able to do that, I think it would result in significant advantages, not only because of the beneficial impact that competition tends to have on the cost of operations, but also because in the event of technical problems or mishaps that might result in a lengthy stand-down for some reason for one system, we could use an alternate system to transport our astronauts back and forth from orbit."

Griffin expressed support for the decision to hand over to the private sector the responsibility of transferring cargo and eventually crew to the International Space Station and other destinations in low-Earth orbit. But, he objects to policy decisions that require NASA to procure these services solely from commercial companies.

Instead, Griffin advocated that the government and commercial industry should develop spaceflight capabilities in tandem.

Still, Griffin said that the difficulty in shaping publicly funded programs, particularly NASA's human spaceflight program, is due to the lack of public agreement and rationale to undertake such endeavors.

In the spirit of exploration

But NASA has a responsibility to continue its legacy of exploration, Simpson said, and human spaceflight is an inextricable part of that.

"We cannot forget that from an international perspective, the world looks to us to lead," Simpson said. "They recognize that however they might disagree with what they see us do or hear us say, they expect us to build a pathway. They're afraid that if we lose our way, they lose their way. If we can't navigate our way through this, then civil space is not just in trouble here, it's in trouble in lots of other parts of the world."

Simpson also emphasized the need to continue international cooperation in space, as was successfully demonstrated with the construction of the space station. These international relationships will not only be beneficial for space operations, but will also serve to inspire not only American citizens, but people all around the world, Simpson said.

"The United States of America, not just NASA, needs to invest in going to interesting places and not just taking people and machines there, but taking human society off of Earth," Simpson said. "We've done that with the station. We have other places we need to do it. It is the future of exploration, but it is also the future of seizing the heart and soul and minds of the best and the brightest, not just here, but in many, many countries around the world."