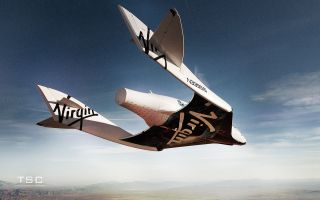 Virgin Galactic's SpaceShipTwo has already performed 16 unpowered flight tests, in which the winged vehicle glides back to to a runway after being dropped in midair from its mothership, known as WhiteKnightTwo. The company, which was founded by British billionaire Richard Branson, hopes to turn the craft's rocket on before the end of the year.

"That is something I can't give you an exact date on, but it should be sometime later this year," William Pomerantz, vice president of special projects for Virgin Galactic, told reporters here during the 2012 Next-Generation Suborbital Researchers Conference (NSRC-2012). "We are already in the process of preparing that."

SpaceShipTwo is designed to be carried by WhiteKnightTwo up to about 50,000 feet (15,000 meters), and then dropped. At this point, its rocket engine will ignite to propel it the rest of the way to a maximum altitude of about 62 miles (100 kilometers).

If all goes well with powered testing, Pomerantz added, the company may be able to start flying paying customers sometime in 2013 or 2014. As is Virgin's custom, he declined to lay out a firm timeline, stressing that the company will fly when it's ready.

Pomerantz announced that Virgin Galactic is nearing another big milestone as well. It has signed up almost 500 paying passengers — people who think a trip to suborbital space is worth the $200,000 Virgin is charging for a seat on SpaceShipTwo.

"We're about to break 500," Pomerantz said. "That's a nice milestone for us, especially when you consider that, if you add up every astronaut NASA's ever flown, plus every cosmonaut that the Russians have ever flown, every taikonaut the Chinese have ever flown, that's about 525."

SpaceShipTwo is being designed to take scientists, their experiments and space tourists up on suborbital flights that would briefly reach the edge of space but return to Earth without making a full lap around the planet. If the craft is not carrying sizeable research payloads, the spaceliner can accommodate six paying passengers, along with two pilots.

Virgin isn't the only player in the suborbital spaceflight game. Other companies, including XCOR Aerospace, Blue Origin and Armadillo Aerospace, are also developing vehicles that can transport both experiments and passengers to suborbital space.

On Monday (Feb. 27), XCOR gave away a free flight on its two-seat Lynx vehicle, a $95,000 value. But the winner of this prize — an NSRC-2012 attendee chosen via random drawing — may not be able to claim it, since he's a government employee.