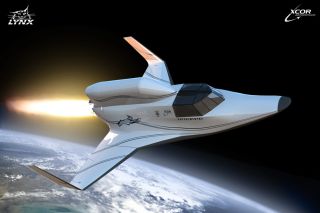 XCOR Aerospace's Lynx spacecraft is shown launching into space with a science payload on its dorsal side in this artist's illustration.
(Image: © XCOR Aerospace)

PALO ALTO, Calif. — A NASA scientist has won a free flight to suborbital space, but he may not be able to claim the prize.

"I'm not sure I can accept this," Goodwin said, referencing his status as a government employee, which may prevent him from using the prize. "I'm very surprised."

If government regulations and red tape prohibit Goodwin from claiming the award, a backup is ready to step up; XCOR officials drew an alternate name just in case. Conference attendees who registered in advance were entered in the drawing.

XCOR's Lynx is a two-person space plane designed to take off and land on a conventional airport runway. In addition to flights with paying passengers, the rocket-powered vehicle is being designed to carry research experiments to suborbital space.

XCOR officials have said the Lynx could be in flight-test operations by the end of 2012. The company plans to charge $95,000 per seat when the space plane is up and running. XCOR also announced Monday that it recently secured $5 million in equity funding that will help fund its work on the Lynx.

Whoever eventually goes up in the space plane will be in for a real treat, XCOR officials said.

"Hang onto your hat, because it's going to be one amazing ride," said former NASA astronaut and space shuttle commander Rick Searfoss, XCOR's chief test pilot.

XCOR isn't the only company developing craft to take scientists, experiments and tourists up to suborbital space. Virgin Galactic, for example, is charging $200,000 for rides on its SpaceShipTwo vehicle, which seats six passengers, along with two pilots.

NSRC-2012, which runs through Wednesday (Feb. 29), brings scientists and educators together to talk about how commercial suborbital spacecraft can help advance research in atmospheric science, physics, planetary science, biology and physiology, among other fields, according to conference organizers.

The meeting is jointly hosted by NASA, the Commercial Spaceflight Federation, and the Colorado-based Southwest Research Institute.