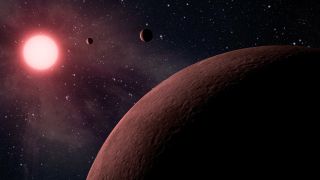 More than 2,700 astronomers from around the world are convening in Austin, Texas from Jan. 8-12 to discuss the latest discoveries from space at the 219th meeting of the American Astronomical Society (AAS).

The meeting will feature the newest findings about some of the biggest mysteries of the cosmos, including dark matter, dark energy, alien planets, and more.

SPACE.com's Clara Moskowitz and Denise Chow will provide complete coverage from the 219th AAS meeting. You can track the conference on Twitter by following Clara (@ClaraMoskowitz) and Denise (@denisechow) and by following the hash tag #AAS219.

See SPACE.com's complete coverage of the Austin AAS meeting in below:

Space Bubbles Offer Glimpse at Our Sun's Evolution
Distant space bubbles may hold clues to the history of our own sun.

Milky Way's Color Is White As a Morning's Snow
Our galaxy is aptly named the Milky Way — it looks white, the color of fresh spring snow in the early morning, scientists now reveal.

AAS Dispatch: International Borders Are Visible From Space
It's a popular saying that international borders aren't visible from space, but it's just not true, says one veteran astronaut.

Black Hole Fires Gas 'Bullets' Into Space
Astronomers have captured the moment when a black hole launched super-fast "bullets" of gas into space at one-quarter the speed of light, a new study reports.

'Saturn on Steroids': 1st Ringed Planet Beyond Solar System Possibly Found
An enigmatic object detected five years ago in space may be a ringed alien world comparable to Saturn, the first such world discovered outside our solar system, scientists now say.

AAS Dispatch: An Encyclopedia of Alien Planets
A team of astronomers has put together an online catalog of alien planets to help researchers and the public keep up with the intensifying flurry of exoplanet discoveries.

AAS Dispatch: Science Should be More Than Just Practical
In an age of dwindling budgets and political pressure for research to provide tangible benefits to society, a prominent astronomer says science should aspire to more than that.

Tiny Planets Around a Tiny Star - Infographic
See how the small alien planets stack up to our own solar system and Jupiter in the SPACE.com infographic above.

3 Alien Planets Smaller Than Earth Found
Astronomers have discovered the three smallest alien planets yet, including one that's just the size of Mars. The alien worlds, detected using publicly available data from NASA's Kepler mission, are 0.78, 0.73 and 0.57 times the diameter of Earth, respectively; the smallest one is roughly Mars-size.

A Galaxy Full of Alien Planets - Infographic
See how the alien planet population of our galaxy stacks up in the SPACE.com infographic above.

160 Billion Alien Planets May Exist in Our Milky Way Galaxy
Alien planets are incredibly common in our Milky Way galaxy, outnumbering stars by a large margin, a new study suggests. On average, each of the 100 billion or so stars in our galaxy hosts at least 1.6 planets, according to the study, bringing the number of likely alien worlds to more than 160 billion.

Mystery of 400-Year-Old Star Explosion Finally Solved
Call it a cosmic scene investigation.  A team of astronomer sleuths has identified the trigger for a powerful supernova that exploded four centuries ago, finding it to be the collision of two white dwarf stars.

AAS Dispatch: Astronaut Looks Back at 50 Years of Human Spaceflight
To celebrate the challenges and achievements of 50 years of human spaceflight, retired NASA astronaut Steven Hawley gave a special lecture Monday (Jan. 9) here at the 219th meeting of the American Astronomical Society.

AAS Dispatch: How to NOT Get Funded in the Astronomy World
The National Science Foundation released a tongue-in-cheek look at the dos and don'ts of space funding.

Monster Galaxy Cluster 'El Gordo' Packs Mass of 2 Quadrillion Suns
The largest cluster of galaxies seen yet in the early universe, a giant that astronomers have dubbed "El Gordo," could one day reveal secrets about the invisible dark matter that fills the universe, researchers said.

Primordial Galaxy Cluster is Farthest Ever Seen
Astronomers have discovered the most distant developing galaxy cluster known to date, shedding light on the formation of large-scale structure in the early universe, a new study reports.

AAS Dispatch: Proposed Space Mission Would Probe Alien Atmospheres
Now that astronomers have found more than 700 alien planets around other stars, it's time to get serious about characterizing what those planets are like, say scientists proposing a new telescope mission.

Milky Way Galaxy's Past Revealed Through New Star Census
Scientists are performing a census of the stars in the Milky Way in an effort to piece together the history of how our galaxy formed.

Hidden Alien Planets Revealed in Old Hubble Telescope Data
When a team of researchers sifted through old data from the Hubble Space Telescope and discovered two hidden alien planets that had gone unnoticed for 13 years, they inadvertently found a new way to seek out alien worlds.

AAS Dispatch: Future NASA Telescope Could 'Sniff' Air of Alien Planets
The James Webb Space Telescope (JWST) could be used as a powerful tool that will enable astronomers to "sniff" the atmospheres of alien planets, according to David Charbonneau, an astronomer at the Harvard-Smithsonian Center for Astrophysics in Cambridge, Mass.

Alien Earths Could Have 2 Suns Like 'Star Wars'' Tatooine
Astronomers should hunt for worlds like the fictional Tatooine in "Star Wars," say researchers calculating whether Earth-like planets can exist around paired stars.

AAS Dispatch: Big Funding Cuts Loom for Astronomy Projects
Astronomers might do well to prepare themselves for disappointment, as the tightening federal budget looks to deal a weighty blow to funding for astronomy research this year.

Biggest Map Yet of Universe's Invisible Dark Matter Unveiled
The hidden side of the universe is now a bit more illuminated thanks to the largest map yet of dark matter, the strange substance thought to inhabit much of space.

Venus to Dance Across Sun in Rare June Skywatching Treat
This year, skywatchers will have the chance to see an astronomical event so rare that it will not occur again for another 105 years: the shadowy passage of Venus across the face of the sun.

Astronomers Flock to Texas for Space 'Super Bowl' Conference
Thousands of astronomers and space scientists from all over the world will descend upon Austin, Texas next week for a conference that is being billed as the "Super Bowl of Astronomy."