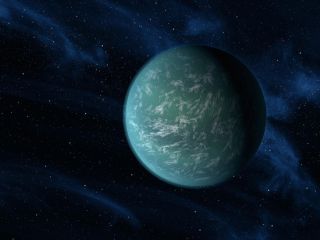 This artist's conception illustrates Kepler-22b, a planet known to comfortably circle in the habitable zone of a sun-like star.
(Image: © NASA/Ames/JPL-Caltech)

The new finds bring the Kepler space telescope's total haul to 2,326 potential planets in its first 16 months of operation. These discoveries, if confirmed, would quadruple the current tally of worlds known to exist beyond our solar system, which recently topped 700.

The potentially habitable alien world, a first for Kepler, orbits a star very much like our own sun. The discovery brings scientists one step closer to finding a planet like our own — one which could conceivably harbor life, scientists said.

The newfound planet in the habitable zone is called Kepler-22b. It is located about 600 light-years away, orbiting a sun-like star.

Kepler-22b's radius is 2.4 times that of Earth, and the two planets have roughly similar temperatures. If the greenhouse effect operates there similarly to how it does on Earth, the average surface temperature on Kepler-22b would be 72 degrees Fahrenheit (22 degrees Celsius).

The $600 million Kepler observatory launched in March 2009 to hunt for Earth-size alien planets in the habitable zone of their parent stars, where liquid water, and perhaps even life, might be able to exist.

Kepler detects alien planets using what's called the "transit method." It searches for tiny, telltale dips in a star's brightness caused when a planet transits — or crosses in front of — the star from Earth's perspective, blocking a fraction of the star's light.

The finds graduate from "candidates" to full-fledged planets after follow-up observations confirm that they're not false alarms. This process, which is usually done with large, ground-based telescopes, can take about a year.

The Kepler team released data from its first 13 months of operation back in February, announcing that the instrument had detected 1,235 planet candidates, including 54 in the habitable zone and 68 that are roughly Earth-size.

Of the total 2,326 candidate planets that Kepler has found to date, 207 are approximately Earth-size. More of them, 680, are a bit larger than our planet, falling into the "super-Earth" category. The total number of candidate planets in the habitable zones of their stars is now 48.

To date, just over two dozen of these potential exoplanets have been confirmed, but Kepler scientists have estimated that at least 80 percent of the instrument's discoveries should end up being the real deal.

The newfound 1,094 planet candidates are the fruit of Kepler's labors during its first 16 months of science work, from May 2009 to September 2010. And they won't be the last of the prolific instrument's discoveries.

"This is a major milestone on the road to finding Earth's twin," Douglas Hudgins, Kepler program scientist at NASA headquarters in Washington, D.C., said in a statement.

Mission scientists still need to analyze data from the last two years and on into the future. Kepler will be making observations for a while yet to come; its nominal mission is set to end in November 2012, but the Kepler team is preparing a proposal to extend the instrument's operations for another year or more.

Kepler's finds should only get more exciting as time goes on, researchers say.

To flag a potential planet, the instrument generally needs to witness three transits. Planets that make three transits in just a few months must be pretty close to their parent stars; as a result, many of the alien worlds Kepler spotted early on have been blisteringly hot places that aren't great candidates for harboring life as we know it.

Given more time, however, a wealth of more distantly orbiting — and perhaps more Earth-like — exoplanets should open up to Kepler. If intelligent aliens were studying our solar system with their own version of Kepler, after all, it would take them three years to detect our home planet.

"We are getting very close," Batalha said. "We are homing in on the truly Earth-size, habitable planets."