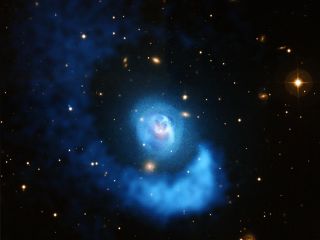 Like wine in a glass, vast clouds of hot gas are sloshing back and forth in Abell 2052, a galaxy cluster located about 480 million light years from Earth.
(Image: © X-ray: NASA/CXC/BU/L.Blanton; Optical: ESO/VLT)

AUSTIN, Texas — Astronomers might do well to prepare themselves for disappointment, as the tightening federal budget looks to deal a weighty blow to funding for astronomy research this year.

The National Science Foundation expects to significantly decrease the number of astronomy and astrophysics grants it awards in 2012 compared to 2011, an agency official said here today (Jan. 9) at the 219th meeting of the American Astronomical Society.

The National Science Foundation is the U.S. government agency that funds basic research into non-medical science fields. In 2011, the agency awarded money to about 20 percent of all proposals submitted to its astronomy and astrophysics grant program.

Ulvestad estimated that the money available for the grant programs in 2012 would be down by 10 to 15 percent compared to 2011, while the number of proposals submitted would increase by 10 percent. That means the fraction of them that get funding will have to decrease.

"We protected the grants programs in '11 by creatively getting rid of other things, but they will go down in '12, there's just no way around it," Ulvestad said to a packed room of anxious researchers here at the Austin Convention Center.

Ulvestad said the agency's ability to fund research is also impacted by a few major astronomy research facilities coming online in the coming years that will take up significant portions of the National Science Foundation's astronomy funding.

One is the Atacama Large Millimeter Array (ALMA), a collection of radio telescopes in Chile that took its first observations in 2011. Another is the Advanced Technology Solar Telescope (ATST), a facility under construction in Hawaii that will be the world's largest sun-studying telescope.

"Those are things that have been coming for five years, 10 years, and it just happens they're hitting at the same time that the budget is at extreme pressure," Ulvestad said. "If we had these new facilities coming up and our budget was following an increasing path, it wouldn’t be this crisis feeling people have now. We've hit this confluence of unfortunate events."