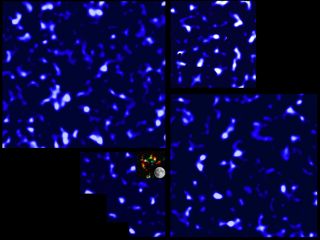 This giant map of invisible dark matter recorded in four directions by the Canada-France-Hawaii Telescope during each season of the year was released on Jan. 9, 2012. The color inset shows the previous largest COSMOS dark matter map and the size of the full moon (as it would appear to the telescope) to scale.
(Image: © Van Waerbeke, Heymans, and CFHTLens collaboration.)

AUSTIN, Texas — The hidden side of the universe is now a bit more illuminated thanks to the largest map yet of dark matter, the strange substance thought to inhabit much of space.

Scientists have created the largest scale rendering of dark matter across the universe, revealing a picture of the invisible stuff thought to represent 98 percent of all matter in the universe.

Dark matter has never been directly detected, but its presence is felt through its gravitational pull on normal matter. Scientists suspect dark matter is made of some exotic particle that doesn't interact with regular atoms.

"We know very little about the dark universe," said co-leader of the study, Catherine Heymans of the University of Edinburgh's School of Physics and Astronomy, during a press conference announcing the findings here at the 219th meeting of the American Astronomical Society."We don't know what the dark matter particle is. It's very widely believed that the final understanding of the dark universe is going to have to invoke some new physics."

The new map reveals the distribution of dark matter over a larger swath of space than ever before. It covers more than 1 billion light-years. One light-year is the distance light travels in a year, about 6 trillion miles (10 trillion kilometers). [See the new giant dark matter map]

To trace invisible dark matter, the researchers searched for signs of its gravitational tug on other matter. They measured an effect called gravitational lensing, which occurs when gravity from a massive body bends space-time, causing light to travel along a curved path through space and appear distorted when it reaches Earth.

The scientists measured warped light from 10 million distant galaxies in four different regions of the sky, caused when those galaxies' light passed by large bundles of dark matter that bent its path.

"It is fascinating to be able to 'see' the dark matter using space-time distortion," another co-author of the study, Ludovic Van Waerbeke of the University of British Columbia, said in a statement. "It gives us privileged access to this mysterious mass in the universe which cannot be observed otherwise. Knowing how dark matter is distributed is the very first step towards understanding its nature and how it fits within our current knowledge of physics."

Scientists hope that by plotting out the distribution of dark matter throughout space, they will come closer to understanding what it is.

"By analyzing light from the distant universe, we can learn about what it has travelled through on its journey to reach us," Heymans said. "We hope that by mapping more dark matter than has been studied before, we are a step closer to understanding this material and its relationship with the galaxies in our universe."

The new maps represent the first direct evidence of dark matter on such large scales.

"What we see here is very similar to the simulation," Van Waerbeke said. "Dark matter is concentrated in lumps and the rest stretches in filaments."

The web of dark matter throughout the universe revealed by the map agreed well with predictions made by computer simulations based on scientists' best theory of dark matter.

"So far we haven't seen any off things, or any deviation from what we expect," Van Waerbeke told SPACE.com.

"These lensing maps are very important tests of our cosmological paradigm," said astronomer Rachel Mandelbaum of Carnegie Mellon University and Princeton University, who was not involved in the new study. "These results could be used as a test of dark matter, dark energy and even the theory of gravity."

In a separate study also presented today at the American Astronomical Society meeting in Austin, Sukanya Chakrabarti of Florida Atlantic University developed a new method of mapping the dark matter in individual galaxies.

Chakrabarti studied ripples on the outskirts of spiral galaxies to trace the shape of the dark matter within and surrounding the galaxies.

This research, targeting the invisible stuff on a much smaller scale than the first study, also helps astronomers hone in on an understanding of dark matter.

"These results with spiral galaxies allow the study of matter in a regime of individual galaxies, which has not been possible with weak lensing," Mandelbaum said. "Both of these results represent two important ways of studying the dark mater, but they're in two very different regimes."