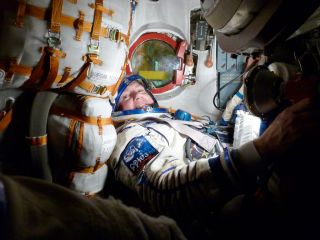 The first Dutchman to return to orbit, André Kuipers' second stay on board the International Space Station (ISS) is the European Space Agency’s PromISSe mission. The five-month mission launched on Dec. 21, 2011.
(Image: © ESA)

The first Dutch astronaut to return to space, André Kuipers is about to begin five and a half months on board the International Space Station (ISS), a mission the European Space Agency named "PromISSe."

To that end, organizations in the Netherlands have offered up products aimed at keeping Kuipers' PromISSe — from keeping time to keeping in touch to keeping well fed.

Kuipers launched to space on Wednesday (Dec. 21) with Russian cosmonaut Oleg Kononenko and NASA astronaut Don Pettit. The three are scheduled to arrive at the station on Friday (Dec. 23), when they will join the outpost's 30th expedition crew.

All three are spaceflight veterans. This is Kuipers' second time aboard the station. His first mission, "Delta," in 2004 lasted just 11 days on the orbiting laboratory.

With much more time to consider this time around, Dutch companies have contributed to making Kuipers' stay more comfortable, while also giving his fellow countrymen ways to commemorate their astronaut's journey. [Astronaut Holiday Photo Album]

Despite the brevity of his 2004 mission, Kuipers said that he lost track of time while in space. To help address this, Dutch watchmaker Roland Oostwegel created the "R.O.1 SPACE Special Edition," a timepiece that features a dial that displays mission elapsed time in days and weeks.

Kuipers launched with the special watch, which like all his and his crewmates' other equipment had to be certified for use on the station. Fabricated out of carbon-fiber so it is lightweight, the watch also features a sub-dial display for the time it takes for the space station to circle the Earth, 91 minutes and 59 seconds.

Other watches, like Omega's Speedmaster X-33 which is issued to all station crew members, also display mission elapsed time, though as one of its several different digital displays.

To celebrate Kuipers' mission and the first Dutch watch in space, Roland Oostwegel also created a limited edition series of similar watches for those on the ground. Unlike Kuipers' "special edition" timepiece though, the stainless steel, titanium, gold, and ceramic Earth-based versions swap out the mission elapsed time feature for a day and date calendar display.

PostNL, in cooperation with the European Space Agency, began this week offering a collection of space postcards and stamps honoring and showing Kuipers in space.

The 34 different postcards feature photos from Earth orbit of cities, the wonders of the world and space. The limited edition stamps, which are offered in a "sheetlet" of three, show Kuipers during his 2004 mission and the Earth as viewed from the International Space Station.

Both the postcards and the stamps can be ordered online through PostNL and its online service, KaartWereld. The stamp sheetlet, which comes with three of the postcards, cost €4,95 (about $6.50).

Not all companies contributing to Kuipers' mission needed to develop new products — some were off the (food store) shelf.

Station crew members are allowed to have a small supply of "bonus" foods to amend their regular menus. In Kuipers' case, he chose a taste of home.

Each of his nine bonus food containers include two blocks of New Amsterdam, Dutch cheese produced by Westland Kaasspecialiteiten. Sealed to stay fresh for up to a year, the 18 cheese squares were launched to the space station on a Russian resupply craft.

A gourmet cheese, New Amsterdam is described to have a "buttery" aged Gouda flavor.

"It is our great honor to supply André Kuipers and his colleagues with a stock of Old Amsterdam in space," said Henriëtte Westland, a spokeswoman for the Dutch cheese company. "We are always in search of new fans abroad, but making it as far as outer space we obviously never expected."