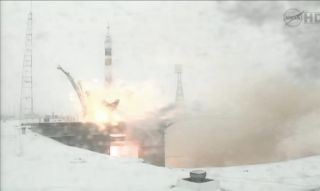 Despite intense snowfall at the launch site, the winds remained calm, which enabled Russian controllers to proceed with the scheduled liftoff.

The spaceflyers are expected to arrive at the space station on Wednesday (Nov. 16) at 12:33 a.m. EST (0530 GMT). The trio will dock their space capsule to the Poisk module on the Russian segment of the orbiting outpost.

Burbank previously visited the space station in 2000 and 2006, on missions aboard the space shuttle Atlantis. This will be his first long-duration stint at the massive orbiting laboratory. Shkaplerov and Ivanishin are both conducting their first spaceflight.

Upon their arrival, Burbank, Shkaplerov and Ivanishin will round out the station's Expedition 29 crew, which currently consists of commander Mike Fossum of NASA, Japanese astronaut Satoshi Furukawa and Russian cosmonaut Sergei Volkov.

Fossum, Furukawa and Volkov were asleep in space during preparations for tonight's Soyuz launch, but woke up specially to watch a live broadcast of the liftoff from onboard the orbiting complex, according to NASA officials.

Commander Fossum and his two crewmates have been living and working aboard the station since June. They are scheduled to return to Earth on Nov. 21. Before his departure, Fossum will hand over command of the station to Burbank, who will lead the station's new Expedition 30 mission for the duration of his stay. [50 Great Russian Rocket Launch Photos]

Tonight's launch represented a critical milestone for the Russian Federal Space Agency and its fleet of Soyuz rockets. In August, a Soyuz booster carrying a robotic cargo ship crashed in Siberia after an issue cropped up in the rocket's third stage.

The unmanned Progress 44 cargo freighter and its 2.9 tons of supplies onboard were lost in the accident. The crash was a rare mishap for the typically dependable Soyuz brand of rockets.

The accident temporarily grounded the rocket fleet since the booster used to loft the robotic Progress ships are similar to the ones used to deliver astronauts and cosmonauts to the space station. Russia's Federal Space Agency conducted an investigation into the matter, and traced the problem to the gas generator in the rocket's third stage. This conclusion was also confirmed by an independent NASA panel.

The first supply run to the orbiting complex since the August crash occurred on Oct. 30, when an unmanned Progress 45 freighter successfully launched to the station carrying nearly three tons of supplies.

Tonight's launch helps restore confidence in the Russian rocket, which is currently NASA's only way to launch its astronauts to the space station. Following the retirement of the agency's space shuttles, NASA is relying on Russian boosters and vehicles to ferry American spaceflyers to the orbiting outpost.

In the meantime, commercial companies are developing new spaceships to first take cargo and then crewmembers to and from destinations in low-Earth orbit.

In fact, the Expedition 30 crew could also be present for the test flights of two robotic commercial vehicle during their stay at the station. SpaceX's Dragon capsule and Orbital Sciences' Cygnus freighter are tentatively scheduled to carry out demonstration flights of their spacecraft in the new year.

SpaceX currently holds a $1.6 billion NASA contract to make 12 supply flights to the station. In December 2010, the company made its first orbital test flight with the Dragon capsule, which launched atop the company's Falcon 9 rocket. Orbital Sciences has a $1.9 billion contract to make eight flights using the company's Cygnus capsule and Taurus 2 rocket, both of which are under development.

NASA retired its 30-year space shuttle program to focus on exploration missions beyond low-Earth orbit, such as to an asteroid and Mars. With commercial companies stepping in to provide taxi services to and from the space station, NASA can instead concentrate on developing new rockets and spacecraft to push deeper into space.

"Speaking from the perspective of somebody who’s had the opportunity, twice anyways to launch on the shuttle; to see the shuttles retired it’s certainly bittersweet," Burbank said in a preflight interview. "The space shuttle for all its majesty and capability, was never designed to go beyond just a couple hundred miles from planet Earth, so if we want to go to the moon, if we want to go to asteroids and Mars, we need a new vehicle and so that’s what we’re looking at right now."