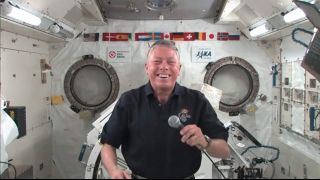 You asked, and he answered.

Fossum launched to the International Space Station on June 9, and is scheduled to wrap up his long duration mission aboard the orbiting outpost in mid-November.

Here's what Fossum had to say about living and working in space, a future manned mission to Mars, and how we should inspire people to explore the cosmos:

Vicky Barker: What's the one thing besides friends and family that you miss most about home?

Commander Mike Fossum: I think for me, fresh fruits and vegetables would be near the top of my list, because eventually you get a little tired of eating food out of a pouch rehydrated or stabilized. I think a really good pizza is high on my list of things too. So it's creature comforts, things that I want to eat. Another thing that I miss are just the sounds and smells of nature, of growing things, of the damp, moist Earth from which springs forth life. I really miss that. [Space Food Photos: What Astronauts Eat in Orbit]

Rob: Would you command a mission to Mars right now if it were possible and if you were given the choice? If so, what top 3 personal items would you bring to leave there?

Fossum: Wow. The first one I can answer: hands down, absolutely. When I was a child dreaming about going into space, I started a notebook on Mars, because I was pretty sure I was going to see human footprints on Mars, and that I might have the chance to put those footprints on there myself, or add mine to others. I don't think it's likely I'm going to be going to Mars now, but I do still think that I will see that in my lifetime — in our lifetimes — and look forward to it a lot.

Not sure what I would take to leave on Mars as just part of representing humankind. I'll have to pass on that one.

Tim Green: Despite having gone through countless hours of training, what has surprised you the most about the International Space Station that your training did not cover?

Fossum: You know, that's a really interesting question. Not very much, because our training is extensive. But, as with all training for this kind of business, most of your training focuses on the emergency scenarios, and when you really have to get into the details of knowing the systems, knowing how to respond. And it's critical that you know all of those things for an emergency situation.

But, thankfully, we have very little opportunity to exercise those up here, so there's more on-the-job training for a lot of the payloads work we do. And, simple things like going through and cleaning all of the filters, and things like that. So for me, that was a little bit of a surprise. I found a filter just last week that I had not cleaned in a while. I didn't know it was there. We were doing some airflow measurements and it was a little low. Mission Control asked me to check this filter, I said, 'oh, that's going to be a problem.' Opened up the panel and there was a big furball back there. And so that's just some of the realities of living and working in space and taking over a complex that's this big — longer and wider than a football field, and a lot of details hidden behind little panels that you didn't even know were there. [Gallery: Building the International Space Station]

Vince: What do you feel is needed to recapture the imagination and passion of people to explore the stars? With budget cuts and a weak economy, what can we do to inspire our young people and our governments to make exploration an important priority?

I think it really speaks to the pioneering spirit that's part of being American that wants to explore, wants to reach out to new places and figure out not just to visit them, but how to tame them and how to make them ours. And to live there, not just visit, which has been a great part of my experience having visited space twice on short missions, and now living here for months. It's a very, very different experience.

I think we just need to continue to tell that story and capture the imagination, because you capture the public's imagination, and the imagination of not just young kids, but even the college age kids and other people early in their working careers that want to make a difference in some way. They're not all going to fly in space.

They're not all going to get involved in the space program, but through technology, we can influence our world. And a lot of the problems in our world have come about because of advances in technology. We like the lights on, so we built power plants. And there's a downside to that. But technology is going to be our solution for the future too, to help clean those up, find ways to use our resources more responsibly, leave a smaller human footprint.

Tim Nunes: While I'm sure that NASA thoroughly screens for claustrophobia, do you ever feel strained or otherwise impacted after months of confined living, and if so, how do you alleviate this?

Fossum: Yes, part of the screening is for claustrophobia, and for good reason. You would not be a happy camper shoved particularly into the spacecraft for getting up here. Once you get to the space station, there's room up here and it's big enough that we have some room to work alone sometimes. And we're all working actually in different corners of the space station frequently — daily, we're working separate from each other. [Inside and Out: The International Space Station]

So, there's room to get away, and if you really want to just get away and think about home, you can go to the Cupola and watch home go by underneath you, or make a phone call, literally, to home to talk to our families. So I'm surprised, really, at how I don't think about being cooped up here at all. It's hard for me to comprehend having been here already for four and a half months. It just doesn't seem like it at all. It's a great place, and it doesn't feel small to me. We get along fine, and that's a really good thing.

Milton Rivera: When I see pictures of Earth from space, I see a miracle. What do you as scientists see, and are you still in awe of the view out the windows?

Fossum: That's a really good question, and I have to say that on my first shuttle flight, one of my jobs as soon as the engines cut off, was to un-strap and grab cameras and jump up to the window and look out and get pictures of the external fuel tank as it fell away.

For me, after dreaming from childhood and working through my education and professional career for this opportunity, it struck me looking out the window that I'm not looking at a video, I'm not looking at a picture, I'm looking through a lot of layers of glass, with my own eyes, out the window, at the North Atlantic, with a dappling of white clouds over the top, with this curved horizon with this impossibly thin layer of atmosphere, and then a black sky up above. And what struck me immediately was, I'm looking at the Earth from God's point of view, looking down at the Earth like this. That does strike me the same way. [The World's Tallest Mountains]

As a technical person — I couldn't claim to be a scientist — but as a technical person, I do also appreciate the processes of nature. The geology — I love going across parts of the planet where the rocks really stand out. To see the geology, to see the fault lines, the mountains, the oceans, it's a fascinating thing to watch.