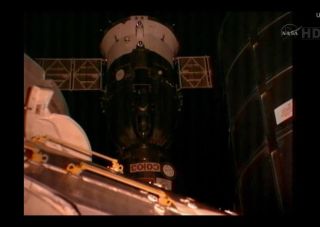 Three spaceflyers have arrived at the International Space Station, their new home for the next 5 1/2 months.

During preparations yesterday for the spacecraft's rendezvous with the station, a slight issue was detected with one of the Soyuz thrusters. Russian flight controllers determined, however, that it would not impact the capsule's docking operations.

"Everything went nominal," Vladimir Popovkin, head of the Russian Federal Space Agency, said in a post-docking news briefing. "I would like to point out that everything happened even five minutes ahead of schedule. There were a couple of issues regarding one of the thrusters, but the system logic allowed us to compensate for this."

The arrival of the new crewmembers brings the population of the space station back up to six people. NASA astronaut Ron Garan and Russian cosmonauts Alexander Samokutyaev and Andrey Borisenko have been living and working on the orbiting outpost since April 6.

Garan, Samokutyaev and Borisenko, the station's commander, were on hand to welcome the new residents after the hatches were opened between the two spacecraft at 8:34 p.m. EDT (0034 June 10 GMT). Fossum, Volkov and Furukawa were all smiles as they floated through the hatch and exchanged hugs. The six spaceflyers now make up the station's Expedition 28 crew. [Amazing Space Photos by Astronaut Ron Garan]

The united crew then gathered in the Russian Zvezda service module to receive congratulatory calls and well-wishes from space agency officials, friends and family members who had gathered at the Russian Mission Control in Moscow.

"It's great to see all you guys on orbit," NASA's space operations chief Bill Gerstenmaier radioed to the crew from Mission Control-Moscow. "You all look great and the smiles are just amazing. Have a good expedition and enjoy the space station."

Fossum, Volkov and Furukawa launched into orbit on Tuesday (June 7) aboard the Russian-made Soyuz TMA-02 spacecraft. The trio lifted off at 4:12 p.m. EDT (2012 GMT) from the Baikonour Cosmodrome in Kazakhstan. [Video: Soyuz Blasts Off to Space Station]

The new crewmembers will live and work at the space station for roughly 5 1/2 months. During their stay, they will be involved in a variety of scientific experiments and research, ranging from life sciences to Earth observation.

The astronauts will also perform routine maintenance and upgrades to the station's infrastructure as needed.

Additionally, the Expedition 28 crew will play host to the space shuttle Atlantis and its four astronauts next month. Atlantis is currently scheduled to embark on its last mission — the final mission of NASA's space shuttle program — on July 8.

Atlantis' STS-135 flight will deliver critical supplies to the International Space Station to help prepare the complex for the years following the retirement of the shuttle program. When NASA stops flying the shuttle, the agency will no longer be able to take advantage of the enormous cargo-carrying capability of its three-orbiter fleet.

NASA's 30-year shuttle program is being retired to allow the agency to focus on exploration missions beyond low-Earth orbit, such as to Mars or an asteroid. Over the long haul, NASA hopes that commercial American spacecraft will provide taxi services to the station. But for at least next five years or so, the Soyuz will be carrying that load.