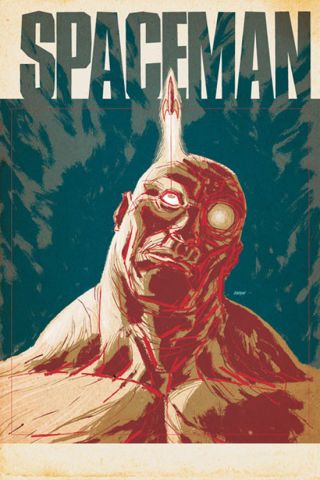 NEW YORK — In the future, NASA creates a superhuman astronaut tailor-made to live on Mars.

That's the concept behind a new comic book series that hits stands Wednesday (Oct. 26). The nine-issue series, called "Spaceman," is written by Brian Azzarello, with art by Eduardo Risso and covers by Dave Johnson. It's published by the Vertigo imprint of DC Comics.

"I took things that I wanted to happen in the future, like all these dire climate change predictions," Azzarello said of his inspiration for the story. "They all come true, which leads to economic upheaval and political upheaval and social unrest and that kind of really, really rich milieu to work a story into. In the middle of the story is this character, his name is Orson."

Orson is described as a "hulking, lonely loser who spends his days collecting scrap metal and dreaming of the startrekking life he was promised," on Vertigo's web site.

While the concept may sound bizarre, scientists are actually investigating whether genetic engineering could create lifeforms better suited for the harsh conditions of space travel, such as the strong radiation to be encountered on planets with thin atmospheres like Mars.

The "Spaceman" story follows Orson, as well as the ramifications of his creation on NASA.

"30 years to prior to the story beginning, he was genetically engineered to get to Mars by NASA," Azzarello said. "When the general public got wind of it, NASA got shut down. They were playing God."

Eventually, Orson gets wrapped up in a celebrity child kidnapping case. Though he tries to step up as a hero, he risks causing even more heartbreak.

Each issue of the new series is retailing for $1 in stores, or online for 99 cents.