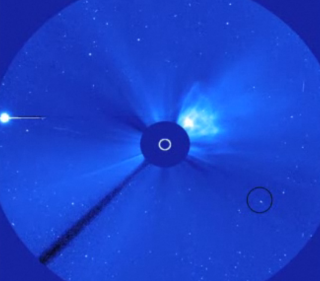 This still from a video taken by the SOHO spacecraft shows a comet (circled) streaking toward the sun on Sept. 13, 2011. The sun has just fired off a coronal mass ejection; Venus is the large, bright object on the left.
(Image: © SOHO/NASA/ESA)

A newly discovered comet is making a kamikaze dive into the sun today, just hours after a solar storm sent a massive cloud of charged particles streaking into space.

The comet was detected on Monday (Sept. 12) by amateur astronomers Michal Kusiak of Poland and Sergei Schmalz of Germany, according to the website Spaceweather.com, which monitors space weather and skywatching events.

But the icy wanderer wasn't expected to stay on astronomers' radar for long. Soon after its discovery, it strayed too close to the sun, with certain doom ahead. [Video: Sun-Diving Comet Dragged to its Demise]

"The icy visitor from the outer solar system is expected to brighten to first magnitude before it disintegrates during the late hours of Sept. 14th," Spaceweather.com wrote in an update Tuesday.

In a visually dramatic coincidence, the comet is making its death plunge just hours after the sun unleashed a powerful coronal mass ejection (CME) — an eruption that can blast billions of tons of solar plasma into space at speeds up to 3 million mph (5 million kph).

The Solar & Heliospheric Observatory (SOHO) spacecraft, a joint project of NASA and the European Space Agency, captured both the solar storm and the doomed comet's progress on video.

The kamikaze comet is thought to belong to the so-called Kreutz family of comets, Spaceweather.com reported. Kreutz comets have orbits that approach within a few hundred thousand miles of the sun.

All Kreutz comets are believed to be the remains of one giant comet that broke apart several centuries ago. They are named after 19th-century German astronomer Heinrich Kreutz, who first demonstrated that such comets were related.

The sun has been spouting off more big CMEs and strong solar flares recently as it works toward a maximum in its 11-year activity cycle. Just last week, for example, the sun generated two X-class flares — the strongest type — and three CMEs.

If they're powerful enough and aimed directly at Earth, CMEs can wreak havoc, disrupting GPS signals, radio communications and power grids. However, last week's solar eruptions delivered mere glancing blows to our planet, so the effects were mainly limited to dazzling, super-charged displays of the northern lights.

Scientists expect the peak of the current cycle, which is known as Solar Cycle 24, to come in 2013.