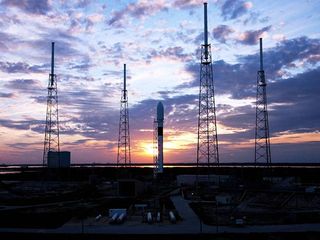 “I’d call it an oxidizer-rich shutdown,” former NASA astronaut Ken Bowersox, SpaceX’s vice president of astronaut safety and mission assurance, told Space News in a Sept. 9 interview. “So because of that, when you get that mixture change happening, the temperatures can go up higher than you want inside the gas generator.”

Bowersox added that “those temperatures could have damaged the turbines in the turbopump.” That presents an obstacle for SpaceX, which eventually intends to reuse the nine Merlin engines that power the Falcon 9. [Photos: The Falcon and Dragons of SpaceX]

It does not, however, present an obstacle for cargo delivery missions to the international space station, SpaceX said.

An oxygen-rich shutdown is “not a catastrophic event for the Merlin engine,” Bowersox said. “We’ve been through this on the test stand and we know what it looks like for our engines, so we know that this was not a risk to the mission.”

SpaceX spokeswoman Kirstin Brost Grantham said that the anomaly poses no threat to the company’s upcoming COTS demonstration, a flight to the international space station (ISS) targeted for late November. If that flight goes well, SpaceX would begin making periodic supply runs to the ISS under a $1.6 billion contract NASA awarded the Hawthorne, Calif.-based company in 2008.

Bowersox’s acknowledgement to Space News that the Falcon 9’s main stage experienced an oxygen-rich shutdown came after a discussion of the incident during a joint meeting of the ISS Advisory Committee and the NASA Safety Advisory Panel at NASA headquarters here earlier the same day. The meeting was held to discuss the results at an Aug. 9 meeting with SpaceX and Orbital Sciences Corp., another company under contract to fly cargo to the ISS. [Video: Falcon Heavy - Most Lift Since Saturn 5]

During the August meeting, held at the Johnson Space Center in Houston, SpaceX told the two advisory bodies that there had been an engine anomaly during the most recent Falcon 9 launch, said Charles Daniel, a shuttle and space station safety expert at Herndon, Va.-based Valador Inc., and a member of the ISS Advisory Committee.

“There was no explanation or root cause analysis or corrective action for this particular anomaly,” Daniel said Sept. 9 during the public meeting. “This is a relatively troublesome statement not to recognize that a premature engine shutdown was a significant event.”

SpaceX disputes Daniel’s characterization of the engine anomaly as a premature shutdown.

“We did not have a premature engine shutdown,” Bowersox told Space News.

“This information was presented to NASA and to the [Federal Aviation Administration] not too long after the mission,” Bowersox said. “But it didn’t go to the Aerospace Safety Advisory Panel, it went to some of the different NASA programs that we work with.”

SpaceX spokesman Robert Block said that NASA received a briefing about the flight Dec. 15. SpaceX subsequently delivered full-rate telemetry for the flight on Dec. 28. A full flight report to the agency followed on Feb. 24, Block said.

The company Daniel works for, Valador Inc., was sued in June by SpaceX in Virginia’s Fairfax County Circuit Court. SpaceX brought the suit forward after another Valador vice president, Joseph Fragola, made what SpaceX said were defamatory statements about the safety and reliability of the Falcon 9.

The suit was settled out of court in early August.

According to SpaceX’s complaint, Fragola on June 8 emailed Bryan O’Connor, then NASA’s chief of safety and mission assurance, saying he was trying to verify a rumor that the Falcon 9’s first stage experienced a significant anomaly during its Dec. 8 mission.

“I have just heard a rumor, and I am trying now to check its veracity, that the Falcon 9 experienced a double engine failure in the first stage and that the entire stage blew up just after the first stage separated. I also heard that this information was being held from NASA until SpaceX can ‘verify’ it,” Fragola wrote O’Connor, according to court papers.

Neither Fragola nor Valador have publicly identified the source of the rumor that prompted Fragola to contact O’Connor.