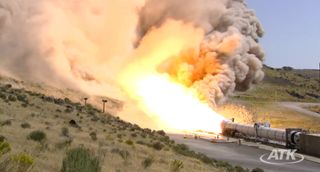 This still from an ATK webcast shows a side view of the five-segment solid rocket booster DM3 during a Sept. 8, 2011 static test firing at the company's motor proving grounds near Promontory, Utah.
(Image: © ATK)

PROMONTORY, Utah — A full-scale test of the world's largest solid rocket motor, which was originally envisioned to power a new NASA rocket, went off without a hitch in Utah's high desert today (Sept. 8).

Built by Utah-based Alliant Techsystems (ATK), the five-segment solid motor ignited just after 4 p.m. EDT (2000 GMT) in a fiery burst followed by two minutes of a deafening roar. The test, called Development Motor 3 (DM3), shook the desert and surrounding mountains and sent massive columns of smoke billowing into the clear blue sky above.

The ATK rocket motor, billed as the world's largest solid rocket booster by its buildiers, was originally slated to be the first stage of the Ares 1 rocket, a booster designed to launch NASA's Orion crew capsule on moon-bound trips under the now-cancelled Constellation program. President Barack Obama scrapped Constellation last year in favor of a new space vision aimed at sending astronauts to an asteroid by 2025. [See photos of the rocket motor test]

But ATK's giant solid rocket booster, which is similar to the twin rockets used to launch NASA space shuttles for 30 years, could see new life as part of NASA's latest heavy-lift rocket plan, called the Space Launch System, or SLS.

The rocket booster could also serve as a component of a proposed commercial launch vehicle called Liberty, which ATK has been discussing with the European aerospace firm Astrium.

Hundreds of space enthusiasts and dozens of news agencies watched the test, which was a ground-based static firing rather than a launch.

The large rocket motor lay on its side during today's firing. After countdown and ignition, fire exploded through the center of the rocket case and burned through the solid fuel ignition material. Seconds later, a roar sounded for two full minutes.

The motor carries a thrust capacity of about 3.6 million pounds, or 22 million horsepower. The motor itself is made of five segments that measure 12 feet (3.7 meters) in diameter. Its total length is 154 feet (47 m).

"At this point and time it’s a complete success for us and we’re really pleased about that," Precourt said.

The test used nearly 1,000 different instruments to gather data on about 40 different objectives. The rocket motor will be certified to fly at temperatures ranging from 40 to 90 degrees Fahrenheit (4 to 32 degrees C).

The motor is also a key piece of the Liberty rocket ATK is developing in cooperation with Astrium.

ATK and Astrium hope Liberty could be a contender to transport NASA astronauts to low-Earth orbit. The vehicle could also loft cargo and satellites to orbits around our planet, ATK officials have said.

Liberty could be ready for its first test flight in 2013, with operations perhaps starting two years later, officials have said.