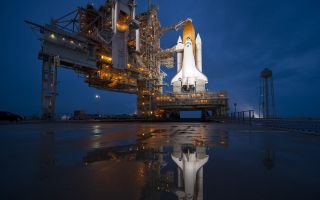 This image of space shuttle Atlantis was taken shortly after the rotating service structure was rolled back at Launch Pad 39A, Thursday, July 7, 2011. Atlantis launched on Friday, July 8, on the final flight of the Space Shuttle Program.
(Image: © NASA/Bill Ingalls)

The space shuttle Atlantis is seen shortly after the rotating service structure (RSS) was rolled back at Launch Pad 39A at the NASA Kennedy Space Center on July 7, 2011 in this cool space wallpaper. The spacecraft lifted off July 8 on the final flight of the Space Shuttle Program, STS-135, a 12-day mission to the International Space Station.