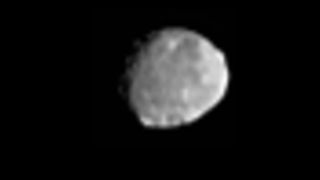 NASA's Dawn spacecraft obtained this image on its approach to the protoplanet Vesta, the second-most massive object in the main asteroid belt. The image was obtained on June 20, 2011.
(Image: © NASA/JPL-Caltech/ UCLA/MPS/DLR/PSI)

The debate over whether the giant asteroid Vesta has a moon could soon be decided.

NASA's Dawn spacecraft will go into orbit in mid-July, when it will take the best-ever photographs of the big rock. Those photographs will give scientists the best evidence yet for or against the existence of a moon around Vesta.

You might think of asteroids as isolated bodies tumbling alone through space, but it's entirely possible for these old "loners" to have companions.

Where do such moons come from?

The Dawn spacecraft's chief engineer Marc Rayman suggests one possible source of a moon around Vesta: "When another large body collides with an asteroid, the resulting debris is sprayed into orbit around the asteroid and can gradually collapse to form a moon," Rayman said in a statement.

Another possibility is a game of "gravitational pinball," such as when a moon formed elsewhere in the asteroid belt might, through complicated gravitational interactions with various bodies, end up captured by the gravity of one of them.

The Hubble Space Telescope and ground-based telescopes have looked for Vesta moons before, and so far seen nothing.

But Dawn is about to be in position for a closer look. This Saturday (July 9), just one week before Dawn goes into orbit around Vesta, the moon hunt will commence. [Video: Hubble Telescope Spies Vesta]

Dawn's cameras will begin taking images of the space surrounding the asteroid, looking for suspicious specks, as it approaches.

"If a moon is there, it will appear as a dot that moves around Vesta in successive images as opposed to remaining fixed, like background stars," says Dawn team member Mark Sykes. "We'll be able to use short exposures to detect moons as small as 27 meters [89 feet] in diameter. If our longer exposures aren't washed out by the glare of nearby Vesta, we'll be able to detect moons only a few meters in diameter."

While you won't see "find a moon" among the mission's science goals, a moon-sighting would be a nice feather in Dawn's cap. Not that it will need more feathers. The probe is already primed to build global maps and take detailed images of the asteroid's surface, reveal the fine points of its topography, and catalog the minerals and elements present there.

Besides, Dawn will become a moon itself when it enters orbit around Vesta. And the probe's motions as it circles will provide a lot of information about the rocky relic.

"We'll use the spacecraft's radio signal to measure its motion around Vesta," Sykes said. "This will give us a lot of detailed information about the asteroid's gravitational field. We'll learn about Vesta's mass and interior structure, including its core and potential mascons (lumpy concentrations of mass)."

Today, the spacecraft is steadily gaining on its target. And with the images taken on this approach to asteroid Vesta, a never-before-seen world grows ever larger and clearer.

"The pictures are beginning to reveal the surface of this battered, alien world," Rayman said. "They're more than enough to tantalize us. We've been in flight for four years, we've been planning the mission for a decade, and people have been looking at Vesta in the night sky for two centuries. Now, finally, we're coming close up to it, and we'll be getting an intimate view of this place."

"In each case, flyby missions occurred first, providing a good estimate of the target's gravity along with information on other aspects of its physical environment, including whether any moons are present," Rayman said. "This time we're much less certain what we'll find."

At a recent press conference, NASA Planetary Science Deputy Director Jim Adams told reporters that Dawn will "paint a face on a world seen only as a 'fuzzy blob' up to now."

What does Rayman think Vesta's face will look like?

"Wrinkled, ancient, wizened, with a tremendous amount of character that bears witness to some fascinating episodes in the solar system's history," he said.

If a new moon is among the episodes, Rayman has a name in mind.