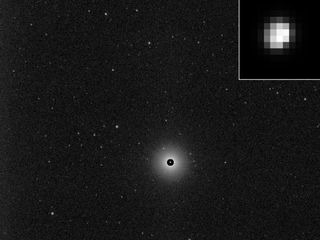 This image, processed to show the true size of the giant asteroid Vesta, shows Vesta in front of a spectacular background of stars. It was obtained by the framing camera aboard NASA's Dawn spacecraft on May 3, 2011, from a distance of about 750,000 miles (1.2 million kilometers). This and other images will help Dawn fine tune navigation during its approach to Vesta, with arrival expected on July 16, 2011.
(Image: © ASA/JPL-Caltech/UCLA/MPS/DLR/IDA)

A NASA spacecraft headed for the asteroid Vesta has snapped its first photograph of the giant space rock, an image that will help fine-tune its approach, NASA officials say.

The new image of Vesta was taken by the framing cameras onboard NASA's Dawn spacecraft on May 3, when the probe was approximately 752,000 miles (1.2 million kilometers) away from the asteroid. The space rock appears as a small, bright pearl against a background of stars. [Dawn spacecraft's first Vesta photo]

Vesta is the second largest asteroid in the solar system. It is located in the asteroid belt between the orbits of Mars and Jupiter. Dawn is expected to enter into orbit around Vesta on July 16, when the asteroid is about 117 million miles (188 million km) from Earth. [Gallery: Asteroid Vesta and NASA's Dawn Spacecraft]

Scientists are keen to study Vesta, which is also known as a protoplanet, because it is a large body that almost formed into a planet.

At 330 miles (530 km) wide, Vesta is the second-biggest object in the main asteroid belt (only the asteroid Ceres, which is also classified as a dwarf planet, is larger). Vesta also appears to have layers – a core, mantle and crust – just as planets such as Earth, Venus and Mars do.

Ground- and space-based telescopes have imaged the bright orb, Vesta, for nearly two centuries, but have not been able to glean much surface detail. [Video: Hubble Telescope Spies Vesta]

Closing in on asteroid Vesta

Dawn mission managers expect Vesta's gravity to capture the spacecraft in its orbit on July 16. To enter the asteroid's orbit, Dawn must match the space rock's path around the sun, which requires very precise knowledge of the object's location and speed.

Dawn will begin collecting science data in early August from an altitude of about 1,700 miles (2,700 km) above the asteroid's surface. As the spacecraft gets closer, it will take multi-angle images of Vesta, which will allow scientists to produce topographic maps.

Dawn will later orbit at a distance of approximately 120 miles (200 km) to perform additional measurements and obtain closer images of portions of the surface.

The spacecraft will remain in Vesta's orbit for one year. After another long journey, Dawn will arrive in 2015 at the asteroid Ceres, its second destination, and an even more massive body in the asteroid belt.

Scientists will be able to unlock secrets of our solar system's early history by studying these two icons of the asteroid belt. Dawn's mission will be to compare and contrast the two giant bodies that were shaped by different forces.

The spacecraft's science instruments will measure surface composition, topography and texture. Dawn will also measure the tug of gravity from Vesta and Ceres to learn more about their internal structures.

By the end of its mission, Dawn will have travelled 3 billion miles (5 billion km), since its launch in September 2007.