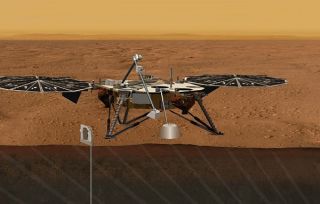 LAUREL, Md. — Take the DNA of the deceased NASA Phoenix Mars Lander, add bits and pieces from several lost Mars missions and you have a "Frankenstein" mission competing for a spot on NASA's space exploration lineup for the next decade.

The mission, once called the Geophysical Monitoring Station, is nameless for now. It would carry a seismometer that flew aboard a doomed Mars Surveyor 98 spacecraft, and a burrowing "mole" device based on an instrument lost during the British Beagle 2 mission's hard landing in 2003.

But the probe's goal is clear: to learn the early evolution of terrestrial planets such as Earth by tapping a Martian geological record more than 4 billion years old. [Best (and Worst) Mars Landings Ever]

"Mars is not an easy place to land on, but we've done it a number of times," said Bruce Banerdt, a planetary scientist at the Jet Propulsion Laboratory in Pasadena, Calif. "We're going to try and do it exactly like how we did it with Phoenix a few years ago."

The mission planners' willingness to cannibalize technologies from other missions has allowed them to put together the Mars mission for relatively low cost. About 77 percent of the spacecraft is lifted from the Phoenix Mars Lander, and another 20 percent has just minor modifications. Only 3 percent of the spacecraft would need to be built from scratch or completely replaced.

Taking the pulse of the Red Planet

Mars sits in the "sweet spot" for understanding terrestrial planets, Banerdt said. That's because it's close enough to Earth's size, but has not experienced the same geological upheaval that erased Earth's early history.

"It's big enough to have undergone the same early processes during the first few hundred million years that Earth has undergone, but small enough so that the clues to those processes are still there," Banerdt told the 9th IAA Low-Cost Planetary Missions Conference here Wednesday (June 22). The conference is the leading forum for the international planetary science community to exchange ideas and information on affordable space exploration.

The proposed Mars mission would investigate the size, composition and state of the planet core, as well as the planetary mantle and outer crust layer. It would also measure the amount of heat within the Martian interior, and gauge the rate and distribution of meteorites striking the Red Planet.

A new concept for the mission came from using state-of-the-art instruments to enable a single lander that could serve as a geological monitoring station. On Earth, geologists typically like to use many monitoring stations to keep track of the planet's seismic rumblings. [Photos: NASA's Phoenix Lander on Mars]

Planners have also leaned on international partners to come up with the select few instruments for the mission payload; more than half the science team comes from outside the U.S., Banerdt said.

A French-led team has developed the SEIS seismometer for gauging the planet's shakes and meteorite impacts. German and Austrian researchers created the Heat Flow and Physical Properties Probe "mole" that can burrow into the ground and pull along a string of temperature sensors to gauge the heat deep in the Martian underground.

If the mission beats out two competitors for NASA's next $425 million Discovery-class mission, its planned launch would take place in March 2016 so that it could arrive on Mars by September 2016.

The first month on Mars would involve "intense operations" to deploy all the equipment for taking the geological pulse of Mars. After that, mission planners could sit back, collect instrument data and see what happens over the next.

"This is not just about Mars," Banerdt said. "It's fundamental to understanding the inner solar system."