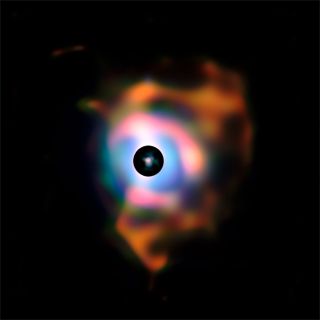 This picture of the dramatic nebula around the bright red supergiant star Betelgeuse was created from images taken with the VISIR infrared camera on ESO’s Very Large Telescope (VLT). This structure, resembling flames emanating from the star, forms because the behemoth is shedding its material into space.
(Image: © ESO/P. Kervella)

A bright nebula of swirling gas around a well-known supergiant star takes on a rainbow of colors in a striking new image that shows the object in unprecedented detail using infrared light.

Astronomers used the Very Large Telescope (VLT) at the Paranal Observatory in Chile to study the nebula around Betelgeuse, a red supergiant star located about 600 light-years away in the constellation of Orion. The Paranal telescope is one of several operated by the European Southern Observatory. in Chile's high Atacama desert.

The new VLT image, released today (June 23), shows the surrounding nebula, which is bigger than the supergiant itself, stretching about 37 billion miles (60 billion kilometers) away from the star's surface. The wispy structures that resemble flames emanating from the star are formed as the behemoth sheds its material into space, ESO officials said in a statement. [See the new photo of Betelgeuse's nebula]

Betelgeuse forms the right shoulder of the "hunter" in the constellation Orion. The star is enormous, about 600 times the size of the sun and 20 times as massive, and is one of the brightest stars in the night sky. In fact, the star is almost the size of Jupiter's orbit – about 4 1/2 times the diameter of Earth's orbit.

Red supergiant stars, like Betelgeuse, are one of the final stages in the lives of massive stars. In this short-lived phase, the star swells in size and expels material into space at a tremendous rate, shedding quantities of material roughly equivalent to the mass of the sun in only 10,000 years.

Material is expelled from a star like Betelgeuse through the formation of huge plumes of gas that extend into space from the star's surface. This phenomenon was previously detected using the sharp-eyed NACO adaptive optics instrument on the VLT.

The other way that Betelgeuse sheds its material is a result of the vigorous up and down movement of giant bubbles in the star's atmosphere, like boiling water circulating in a pot. This process fuels the ejection of the plumes.

The new VLT image, which was taken with the mid-infrared VISIR instrument, shows that the plumes seen close to the star are probably connected to structures in the outer nebula. This massive stellar nursery cannot be seen in visible light, as the very bright Betelgeuse completely outshines it.

The irregular, asymmetric shape of the ejected material indicates that the star did not cast off the material in a symmetrical fashion. The bubbles of stellar material and the giant plumes they create may be responsible for the clumpy look of the nebula, astronomers said.

The material visible in the new image is most likely made of silicate and alumina dust, the researchers said. This is the same material that forms most of the crust of the Earth and other rocky planets. At some point in the distant past, the silicates of the Earth were formed by a massive, and now extinct, star similar to the supergiant Betelgeuse.

This composite image released by the European Southern Observatory reproduced the earlier NACO observations of the plumes in the central disc. The small red circle in the middle spans about 4 1/2 times that of the Earth's orbit and represents the location of Betelgeuse's visible surface.

The black disc is a very bright part of the image that was masked to allow the fainter nebula to be seen. The VISIR images were taken through infrared filters sensitive to radiation at different wavelengths, with the shades of blue corresponding to shorter wavelengths, and red to longer.