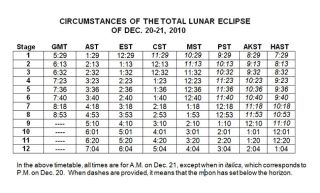 Noenthusiastic sky watcher evermisses a total eclipse of the moon. The spectacle is often morebeautiful andinteresting than one would think. To prepare for the rare event on Dec.20-21,here are some tips to keep in mind.

Duringthe time that the moon isentering into, and later emerging from, the Earth's shadow, secondaryphenomenamay be overlooked. Below we describe 12 stages of a total lunareclipse. [Lunar Eclipse Viewing Guide]

Probablynot all of those mentionedwill occur because no two eclipses are exactly the same. But many will,and thosewho know what to look for have a better chance of seeing them! [Amazingphotos of a total lunar eclipse]

Click here for atable showing the times of all 12stages in different time zones. This starchart shows where in the sky the upcoming lunar eclipse willappear.

1)Moon enters penumbra (12:29 a.m. EST/9:29 p.m. PST)  Theshadow cone of the earth has two parts: a dark, inner umbra, surroundedby a lighter penumbra. The penumbra is the paleouter portion of the Earth'sshadow. Although the eclipse begins officially at this moment, this isinessence an academic event. You won't see anything unusual happening tothe moon- at least not just yet.

TheEarth's penumbral shadow is sofaint that it remains invisible until the moon is deeply immersed init. Wemust wait until the penumbra has reached roughly 70 percent across themoon'sdisk. For about the next 45 minutes the full moon will continue toappear toshine normally although with each passing minute it is progressing everdeeperinto the Earth's outer shadow.

2)Penumbral shadow begins toappear (1:13 a.m. EST/10:13 p.m. PST)  Now the moon has progressed far enough into thepenumbra so thatit should be evident on its disk. Start looking for a very subtle lightshadingto appear on the moon's upper left portion. This will becomeincreasingly moreand more evident as the minutes pass; the shading will appear to spreadanddeepen. Just before the moon begins to enter the Earth's dark umbralshadow thepenumbra should appear as an obvious smudge or tarnish on the moon'sleftportion.

3)Moon enters umbra (1:33 a.m. EST/10:33 p.m. PST)  The moonnow begins to cross into the Earth's dark central shadow, called theumbra. Asmall dark scallop begins to appear on the moon's upper left-hand(northeastern)limb. The partial phases of the eclipse begin; the pace quickens andthe changeis dramatic. The umbra is much darker than the penumbra and fairlysharp-edged.

Asthe minutes pass the dark shadowappears to slowly creep across the moon's face. At first the moon'slimb mayseem to vanish completely inside of the umbra, but much later, as itmoves indeeper you'll probably notice it glowing dimly orange, red or brown.Noticealso that the edge of the Earth's shadow projected on the moon iscurved.  Hereis visible evidence that the Earth is a sphere, as deduced by AristotlefromIunar eclipses he observed in the 4th century B.C.

Almostas if a dimmer switch wasslowly being turned down, the surrounding landscape and deep shadows ofa brilliantmoonlit night begin to fade away.

4)75 percent coverage (2:23 a.m. EST/11:23 p.m. EST)  Withthree-quarters of the moon's disk now eclipsed, that part of it that isimmersed in shadow should begin to very faintly light up  similar to apieceof iron heated to the point where it just begins to glow. It nowbecomesobvious that the umbral shadow is not complete darkness. Usingbinoculars or atelescope, its outer part is usually light enough to reveal lunar seasandcraters, but the central part is much darker, and sometimes no surfacefeaturesare recognizable.

Colorsin the umbra vary greatlyfrom one eclipse to the next. Reds and grays usually predominate, butsometimesbrowns, blues and other tints are encountered.

5)Less than five minutes tototality (2:37 a.m. EST/11:37 p.m. PST)  Several minutes before (and after) totality, thecontrastbetween the remaining pale-yellow sliver and the ruddy-brown colorationspreadover the rest of the moon's disk may produce a beautiful phenomenonknown tosome as the "Japanese lantern effect. "

6)Total eclipse begins (2:41 a.m. EST/11:41 p.m. PST)  Whenthe last of the moon enters the umbra, the total eclipse begins. Howthe moonwill appear during totality is not known. Some eclipses are such a darkgray-black that the moon nearly vanishes from view. During othereclipses it canglow a bright orange.

Thereason the moon can be seen atall when totally eclipsed is that sunlight is scattered and refractedaroundthe edge of the Earth by our atmosphere. To an astronaut standing onthe moonduring totality, the sun would be hidden behind a dark Earth outlinedby abrilliant red ring consisting of all the world's sunrises and sunsets.

Thebrightness of this ring aroundthe earth depends on global weather conditions and the amount of dustsuspendedin the air. A clear atmosphere on Earth means a bright lunareclipse. If a major volcanic eruption has injected particlesinto thestratosphere, the eclipse is very dark.

Becauseof the recent eruptions ofthe Eyjafjallaj?kull volcano in Iceland last spring and the Merapivolcano inIndonesia in October, one and possibly two clouds of ash and dust mightbecurrently floating high above the Earth. As a result, the moon mayappear darkerthan usual during this eclipse; during totality, parts of the moonmight evenbecome black and invisible.

Since themoon ismoving to the north of the center of the Earth's umbra, the gradationof colorand brightness across the lunar disk should be such that its lowerportionshould appear darkest, with hues of deep copper or chocolate brown.Meanwhile,its upper portion ? that part of the moon closest to the outer edge oftheumbra should appear brightest, with hues of reds, oranges and evenperhaps asoft bluish-white.

Observersawayfrom bright city lights will notice a much greater number of stars thanwere visibleearlier in the night. The darkened moon will be near the constellationTaurus,just beyond the tips of the bull's horns and hovering high above thestars ofOrion, the hunter.

The darknessofthe sky is impressive. The surrounding landscape has taken on a somberhue.Before the eclipse, the full moon looked flat and one-dimensional.Duringtotality, however, it will look smaller and three-dimensional ? likesomeweirdly illuminated ball suspended in space.

Beforethe moon entered the Earth'sshadow, the temperature at the lunar equator on its sunlit surfacehovered at260 degrees F (127 degrees C). Since the moon lacks an atmosphere,there is noway that this heat could be retained from escaping into space as theshadowsweeps by.

Now,in shadow, the temperature onthe moon has plummeted to minus 280 degrees F (minus 173 degrees C). Adrop ofover 500 degrees F (300 degrees C) in only about two hours!

8)Total eclipse ends (3:53 a.m. EST/12:53 am. PST)  Theemergence of the moon from the shadow begins. The first small segmentof the moonbegins to reappear, followed again for the next several minutes by the JapaneseLantern Effect.

9)75 percent coverage (4:10 a.m. EST/1:10 a.m. PST)  Anyvestiges of coloration within the umbra should be disappearing now.From hereon out, as the dark shadow methodically creeps off the moon's disk itshouldappear black and featureless.