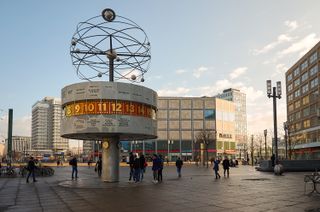 The World Clock in Berlin displays the time in 148 cities around the world, all of which are synchronized with UTC.
(Image: © Shutterstock)

UTC stands for Coordinated Universal Time, a standard used to set all time zones around the world. So, for instance, New York City is in the time zone UTC minus five, meaning that it is 5 hours earlier in NYC than the reading on a UTC clock (except during U.S. daylight savings, when it is 4 hours earlier).

The idea behind universal time was first conceived of in the late 1800s, when rail and shipping lines connected the world and standard timetables were necessary for coordinating economic activity. Before this, the time of day was set by whatever the clocks in that particular location said. But local times could differ from one another by seconds or even minutes — a frustrating situation when you're running late and want to know if you'll catch your train at the station or not.

In 1884, members met at the International Meridian Conference in Washington, D.C., to discuss a way to synchronize clocks around the globe. Lines of latitude, which run east to west around our planet, had always been measured from the equator. But there was no universally agreed-upon equivalent for lines of longitude, which run north to south. At the conference, 41 delegates from 25 countries chose to set the prime meridian — the zero point for longitude lines — as passing through Greenwich, England, according to TheGreenwichMeridian.org. The time standard against which clocks were set then became known as Greenwich Mean Time (GMT).

But by the middle of the 20th century, the new technology of the atomic clock, which can measure time with incredible accuracy, was showing that the Earth's rotation actually varied slightly from day to day. Earthquakes, melting ice sheets and natural oscillations in our planet's motion can cause changes of a few fractions of a second in the amount of time it takes the Earth to spin on its axis, according to NASA.

In 1967, a committee at the United Nations officially adopted UTC as a standard that's more accurate than GMT for setting clocks. UTC incorporates measurements of the Earth's rotation as well as averaged readings from around 400 atomic clocks around the world, according to the website timeanddate.com.

The U.S. Army, which divides up the Earth into time zones named after letters of the alphabet, refers to UTC as Zulu time, since it falls in the Z time zone, and Zulu is the code word for that letter in the International Radiotelephony Spelling Alphabet.