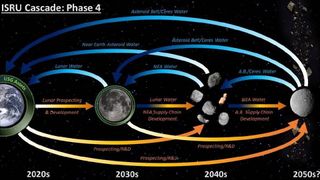 A potential framework for the use of lunar water ice and asteroid resources.
(Image: © Aiden O'Leary/Jason Aspiotis/Booz Allen Hamilton)

This week, the new United States Space Command officially makes its debut, emphasizing that space is a vital military domain — one that's critical to America's security and economic well-being.

Standing up the command coincides with ongoing White House support to establish a Space Force as a separate military branch.

To this end, there is increasing military interest in cislunar space. That's the region extending beyond Earth to the moon. Indeed, the protection of trade routes and lines of communication are traditional military responsibilities, and this will continue to be true as cislunar space becomes "high ground" — a position of advantage or superiority.

At last June's Space Resources Roundtable, held at the Colorado School of Mines in Golden, the military utility of phased approaches to tap lunar water ice and asteroid resources for propulsion and other applications was detailed.

"It's a preliminary first-look study to gauge the potential utility of in-space resources, specifically water in the context of U.S. military and intelligence assets," Aspiotis told Space.com.

"It adds a lot of capability in terms of more maneuverable assets. I think the high brass is definitely paying attention and starting to consider what it really means for their own strategic plans for the future," he said.

It's very important for the military to have diverse supply chains, added O'Leary, so that backups can carry the load in the event that any supply chain is cut off. "I believe it has tremendous value for them," he said.

It is the opinion of Johnson-Freese that cislunar seems to be a "new focus" for the Department of Defense.

"It appears partly driven by the new, open U.S. push toward the weaponization of space … required because virtually everything China does in space is considered a threat — and bureaucratic politics," she told Space.com.

All bureaucracies need a purpose, Johnson-Freese said. "Apparently part of the 'need' is protecting U.S. economic/commercial space interests. It would be interesting to know if this protection was requested by commercial countries or merely anticipated," she said.

Cislunar space is strategically vital because the exploitation of space resources can — and will — alter the balance of power on Earth.

That's the view of Peter Garretson, an independent strategy consultant who focuses on space and defense. A retired Air Force officer, he was previously the director of Air University's Space Horizons Research Task Force, America's think tank for space.

"What is driving the U.S. military to look at cislunar is not some present tactical advantage," Garretson said. "It is fear that China's moves to cislunar space will provide it with a positional and logistic advantage from which it could occupy, constrict, threaten or coerce U.S. interests."

The military will need to articulate requirements, Garretson said, that include cislunar "domain awareness," in-space refueling and the ability to make use of moon-derived propellant.

"Cislunar space offers a vast maneuver space that is difficult to surveil and from which surprises can then emerge, analogous to deep-sea submarine warfare. The People's Republic of China's military-run space program is positioning itself in cislunar space. We are behind, and we must catch up," Garretson said. "Cislunar space is already the high ground, and the U.S. is already far behind China in its position and its planning."

Garretson said that China's Chang'e-4 farside moon mission and the nation's Magpie Bridge relay satellite at the Earth-moon L2 halo orbit are part of a well-conceived and cumulative plan.

"They have already put in place the first node in a broader communications architecture, and perhaps a cislunar space domain awareness system as well," Garretson said. "Next comes sample return, polar landings and 3D printing of a 'Lunar Palace' with an industrial mission to make economic use of lunar resources."

China is absolutely clear on its strategic intent in cislunar space, Garretson said.

"They intend to build an infrastructure to industrialize the moon, and use its resources and ideal location to build large numbers of solar-power satellites for their own energy supply and to service a $21 trillion energy market," Garretson said.

An industrial-logistical system of that magnitude, Garretson said, would obviously establish China as the dominant power.

"Without an equivalent plan to industrialize the moon, the game is lost for the United States of America. We will find ourselves having lost without fighting … confronting a juggernaut with an industrial, logistical and maneuver advantage we cannot possibly match," Garretson concluded.