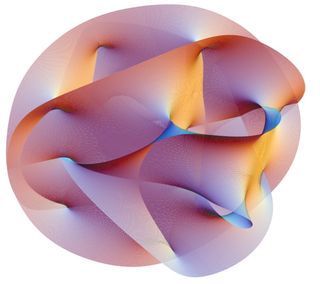 Visualization of a Calabi-Yau manifold, a structure representing the 6 dimensions of space-time that are curled up, according to string theory.
(Image: © Creative Commons | Lunch)

String theorists are shifting focus to solve some rather sticky problems in physics.

Over the past few years, string theory has been less about trying to find a unifying description of all forces and matter in the universe, and more about exploring the AdS/CFT correspondence, a potential link between the tools and methods developed in the string community and some strange physics problems.

While it doesn't have a particularly catchy name, the AdS/CFT correspondence, it is a potentially powerful (but so for unproven) tool to solve complex riddles.

A  universe unlike ours

The "AdS" in the AdS/CFT correspondence stands for "anti-de Sitter," which doesn't explain much at first glance. The name was inspired by Willem de Sitter, a physicist and mathematician who played around with Einstein's theory of general relativity shortly after it was published in 1917. De Sitter experimented with the idea of different kinds of theoretical universes, filling them up with various substances and figuring out how they would evolve.

His namesake, the "de Sitter universe," represents a theoretical cosmos completely devoid of matter but filled with a positive cosmological constant. While this isn't how our universe actually is, as the universe continues to age it will look more and more like de Sitter's vision.

The anti-de Sitter universe is the exact opposite: a completely empty cosmos with a negative cosmological constant, which is quite unlike what we see in our real universe.

But, while this strange theoretical "anti" universe isn't real, it's still a handy mathematical playground for string theory.

String theory itself requires 10 dimensions to be complete (6 of which are tiny and curled up to microscopic proportions), but versions of it can be cast into only 5 dimensions in an anti-de Sitter spacetime, and, while useful for our universe, can still function.

Playing in the field

The other side of the AdS/CFT correspondence, CFT, stands for conformal field theory. Field theories are the bread and butter of our modern understanding of the quantum world; they are what happens when you marry quantum mechanics with special relativity and are used to explain three of the four forces of nature. For example, electromagnetism is described by the field theory called quantum electrodynamics (QED), and the strong nuclear force by the field theory called quantum chromodynamics (QCD).

But there's an extra word there: conformal. But before we get to conformal, I want to quickly talk about something else: scale invariance (trust me, this will make sense in a minute). A field theory is said to be scale invariant if the results don't change if the strength of interactions are varied. For example, you would have a scale invariant engine if you got the same efficiency no matter what kind of fuel you put in.

Our universe is, by and large, decidedly not scale invariant. The forces of nature do change their character with different energy scales and interaction strengths — some forces even merge together at high energies. Scale invariance, as beautiful as it is mathematically, simply doesn't seem to be preferred by nature.

Related: The history and structure of the universe (infographic)

The making of a correspondence

So, on one side of the AdS/CFT correspondence, you have a universe that doesn't look like ours, and on the other, you have mathematical theory that doesn't apply to most situations. So what's the big deal?

The big deal is that over twenty years ago, physicists and mathematicians found a surprising link between string theories written in a five-dimensional anti-de Sitter spacetime and conformal field theories written on the four-dimensional boundary of that spacetime. This correspondence so far unproven, but if there is a connection, it could have far-reaching consequences.

There are a lot of tools and tricks in the language of string theory, so if you're facing a thorny physics problem that can be written in terms of a conformal field theory (it's not common, but it does happen occasionally), you can cast it in terms of the 5d string theory and apply those tools to try to crack it.

Additionally, if you're trying to solve string theory problems (like, for example, the unification of gravity with other forces of nature), you can translate your problem into terms of a conformal field theory and use the tried-and-true techniques in that language to try to crack it.

Most work in this arena has been with trying to use the methods of string theory to solve real-world problems, like what happens to the information that's fallen into a black hole and the nature of high-energy states of matter.

Paul M. Sutter is an astrophysicist at SUNY Stony Brook and the Flatiron Institute, host of Ask a Spaceman and Space Radio, and author of Your Place in the Universe.

Learn more by listening to the episode "Is String Theory Worth It? (Part 7: A Correspondence from a Dear Friend)" on the Ask A Spaceman podcast, available on iTunes and on the Web at http://www.askaspaceman.com. Thanks to John C., Zachary H., @edit_room, Matthew Y., Christopher L., Krizna W., Sayan P., Neha S., Zachary H., Joyce S., Mauricio M., @shrenicshah, Panos T., Dhruv R., Maria A., Ter B., oiSnowy, Evan T., Dan M., Jon T., @twblanchard, Aurie, Christopher M., @unplugged_wire, Giacomo S., Gully F. for the questions that led to this piece! Ask your own question on Twitter using #AskASpaceman or by following Paul @PaulMattSutter and facebook.com/PaulMattSutter.