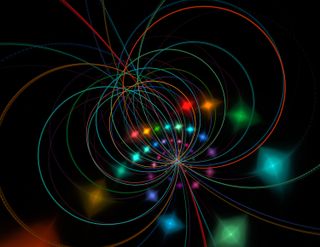 String theory turns the page on the standard description of the universe by replacing all matter and force particles with just one element: Tiny vibrating strings that twist and turn in complicated ways that, from our perspective, look like particles.
(Image: © Shutterstock)

String theory represents a major dream of theoretical physicists — a description of all forces and matter in one mathematical picture. But after countless papers, conferences and dry-erase markers, the breathtaking breakthrough many once hoped for seems further away than ever.

Nevertheless, even without signs of flashy progress, the resulting insight has left a deep imprint on both physics and math. Like it or not (and some physicists certainly don't) string theory is here to stay.

As a so-called "Theory of Everything" candidate, string theory aims to address various theoretical conundrums; the most fundamental of which is how gravity works for tiny objects like electrons and photons. General relativity describes gravity as a reaction of large objects, like planets, to curved regions of space, but theoretical physicists think gravity should ultimately behave more like magnetism — fridge magnets stick because their particles are swapping photons with fridge particles. Of the four forces in nature, only gravity lacks this description from the perspective of small particles. Theorists can predict what a gravity particle should look like, but when they try to calculate what happens when two "gravitons" smash together, they get an infinite amount of energy packed into a small space — a sure sign that the math is missing something.

One possible solution, which theorists borrowed from nuclear physicists in the 1970s, is to get rid of the problematic, point-like graviton particles. Strings, and only strings, can collide and rebound cleanly without implying physically impossible infinities.

"A one-dimensional object — that's the thing that really tames the infinities that come up in the calculations," said Marika Taylor, a theoretical physicist at the University of Southampton in England.

String theory turns the page on the standard description of the universe by replacing all matter and force particles with just one element: Tiny vibrating strings that twist and turn in complicated ways that, from our perspective, look like particles. A string of a particular length striking a particular note gains the properties of a photon, and another string folded and vibrating with a different frequency plays the role of a quark, and so on. In addition to taming gravity, the framework proved attractive for its potential to explain so-called fundamental constants like the electron's mass. The next step is to find the right way to describe the folding and movement of strings, theorists hope, and everything else will follow.

But that initial simplicity turned out to come at the cost of unexpected complexity — string math didn't work in the familiar four dimensions (three of space and one of time). It needed six additional dimensions (for a total of 10) visible only to the little strings, much as a powerline looks like a 1D line to birds flying far overhead but a 3D cylinder to an ant crawling on the wire. Adding to the conundrum, physicists had come up with five conflicting string theories by the mid-1980s. The theory of everything was fractured.

Over the next decade, scientists exploring the relationships between the five theories began to find unexpected connections, which Edward Witten, a theorist at the Institute for Advanced Study in Princeton, New Jersey, gathered up and presented at a 1995 string theory conference at the University of Southern California. Witten argued that the five string theories each represented an approximation of a more fundamental, 11-dimensional theory in a particular situation, much as how Einstein’s space- and time-bending theories of relativity match Newton’s description of objects moving at normal speeds.

The novel theory is called M-theory, although to this day no one knows what mathematical form it might take. The "M" is likely inspired by higher-dimensional objects called membranes, Taylor said, but since the theory has no concrete mathematical equations, the "M" remains a placeholder with no official meaning. "It was really a parametrization of our ignorance," Taylor said. "This parent theory that would describe absolutely everything."

Attempts to find those general equations that would work in every possible situation made little progress, but the alleged existence of the fundamental theory gave theorists the understanding and confidence needed to develop mathematical techniques for the five versions of string theory and apply them in the right context. Strings are far too small to detect with any conceivable technology, but one early theoretical success was their ability to describe black hole entropy in 1996.

Entropy refers to the number of ways that you can arrange the parts of a system, but without being able to see into the impenetrable depths of a black hole, no one knows what type of particles might lie inside, or what arrangements they can take. And yet, in the early 1970s Stephen Hawking and others showed how to calculate the entropy, suggesting that black holes have some sort of internal structure. Most attempts to describe the black hole’s makeup fall short, but tallying the configurations of hypothetical strings does the trick. "String theory has been able to give a spot-on counting," Taylor says, "not just roughly getting it right."

The string framework still faces many challenges, however: It produces an impossible number of ways to fold up the extra dimensions that all seem to fit the broad features of the Standard Model of particle physics, with little hope of distinguishing which is the right one. Moreover, all of those models rely on an equivalence between force particles and matter particles called supersymmetry that, like the extra dimensions, we don't observe in our world. The models also don't seem to describe an expanding universe.

A number of physicists, such as Peter Woit of Columbia University, view these divergences from reality as fatal flaws. "The basic problem with string theory unification research is not that progress has been slow over the past 30 years," he wrote on his blog, "but that it has been negative, with everything learned showing more clearly why the idea doesn't work."

Taylor, however, maintains that today’s models are overly simplistic, and that features like cosmological expansion and a lack of supersymmetry may someday be built into future versions. Taylor expects that, while the new era of gravitational wave astronomy may bring new tidbits of information about quantum gravity, more progress will be made by continuing to follow the math deeper into string theory. "I have a theoretical bias," she said, "but I think the kind of breakthrough I'm describing would come from a chalkboard; from thought."

Regardless of how string theory's Theory of Everything candidacy evolves, its legacy as a productive research program may be assured on mathematical merit alone.

"It can't be a dead end in the sense of what we've learned just from mathematics itself," Taylor said. "If you told me tomorrow that the universe absolutely isn't supersymmetric and doesn't have 10 [spatial] dimensions, we've still connected whole branches of mathematics."

When Witten and others showed that the five string theories were shadows of a single parent theory, they highlighted connections called dualities, which have proven to be a major contribution to mathematics and physics.

A duality is an abstract, mathematical relationship between two situations that look different, but can be translated from one to the other. Consider, for example, a bird hologram on a credit card. Is it 2D or 3D? In a physical sense the sticker is flat, but in a visual sense the image has depth. Both descriptions agree that the hologram contains a bird.

Physicists have used analogous dualities to bridge seemingly unrelated branches of math, such as geometry and number theory. Each operates as a separate language, but dualities let mathematicians translate from one to the other, attacking problems untenable in one framework by using calculations done in the other. Other dualities help overcome challenges in quantum computing. "It's not going to make your next generation iPhone," Taylor said, "But it may make your iPhone for the 22nd century."

Whether string theory's ability to illuminate the dark web connecting different areas of math turns out to be a sign of its potential, or just a lucky coincidence, remains a subject of debate. Witten, speaking at the Institute for Advanced Study in May, acknowledged that while he no longer feels as confident as he once did that did that string theory will evolve into a complete physical theory, his gut tells him that the theory remains productive field of research.

"To me, it's implausible that humans stumbled by accident on[to] such an incredible structure that sheds so much light on established physical theories, and also on so many different branches of mathematics," he told the audience. "I have confidence that the general enterprise is on the right track, but I don't claim that the argument I've given is scientifically convincing."