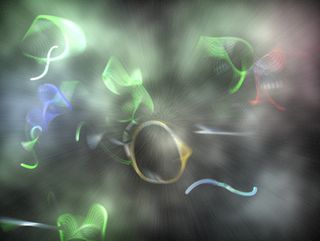 It's such a tempting, beautiful idea. But it's also been 60 years without a result, without a final theory and without predictions to test against experiment in the real universe. Should we keep hanging on to the idea?

The hunt for unity

There's a reason that string theory has held onto the hearts and minds of so many physicists and mathematicians over the decades, and that has to do with gravity. Folding gravity into our understanding of quantum mechanics has proven fiendishly difficult — not even Albert Einstein himself could figure it out. But despite all our attempts, we have not been able to craft a successful quantum description of gravity. Every time we try, the mathematics just gets tangled in knots of infinities, rending predictions impossible.

This is indeed quite tantalizing. It's the only theory of fundamental physics that simply includes gravity — and the original string theory wasn't even trying!

And yet, decades later, nobody has been able to come up with a complete description of string theory. All we have are various approximations that we hope describe the ultimate theory (and hints of an overarching framework known as "M-theory"), but none of these approximations are capable of delivering actual predictions for what we might see in our collider experiments or out there in the universe.

Even after all these decades, and the lure of a unified theory of all of physics, string theory isn't "done."

One of the many challenges of string theory is that it predicts the existence of extra dimensions in our universe that are all knotted and curled up on themselves at extremely small scales. Suffice it to say, there are a lot of ways that these dimensions can interfold — somewhere in the ballpark of 10100,000. And since the particular arrangement of the extra dimensions determines how the strings of string theory vibrate, and the way that the strings vibrate determines how they behave (leading to the variety of forces and particles in the world), only one of those almost uncountable arrangements of extra dimensions can correspond to our universe.

Right now it's impossible to say through string theory itself — we lack the sophistication and understanding to pick one of the arrangements, determine how the strings vibrate and hence the flavor of the universe corresponding to that arrangement.

Since it looks like string theory can't tell us which universe it prefers, lately some theorists have argued that maybe string theory prefers all universes, appealing to something called the landscape.

So how did we end up with this one, and not one of the others? The argument from here follows something called the Anthropic Principle, reasoning that our universe is the way it is because if it were any different (with, say, a different speed of light or more mass on the electron) then life — at least as we understand it — would be impossible, and we wouldn't be here to be asking these big important questions.

If that seems to you as filling but unsatisfying as eating an entire bag of chips, you're not alone. An appeal to a philosophical argument as the ultimate, hard-won result of decades of work into string theory leaves many physicists feeling hollow.

Related: The history and structure of the universe (infographic)

The truth is, by and large most string theorists aren't working on the whole unification thing anymore. Instead, what's captured the interest of the community is an intriguing connection called the AdS/CFT correspondence. No, it's not a new accounting technique, but a proposed relationship between a version of string theory living in a 5-dimensional universe with a negative cosmological constant, and a 4-dimensional conformal field theory on the boundary of that universe.

The end result of all that mass of jargon is that some thorny problems in physics can be treated with the mathematics developed in the decades of investigating string theory. So while this doesn't solve any string theory problems itself, it does at least put all that machinery to useful work, lending a helping hand to investigate many problems from the riddle of black hole information to the exotic physics of quark-gluon plasmas.

And that's certainly something, assuming that the correspondence can be proven and the results based on string theory bear fruit.

But if that's all we get — approximations to what we hope is out there, a landscape of universes, and a toolset to solve a few problems — after decades of work on string theory, is it time to work on something else?

Learn more by listening to the episode "Is String Theory Worth It? (Part 6: We Should Probably Test This)" on the Ask A Spaceman podcast, available on iTunes and on the Web at http://www.askaspaceman.com. Thanks to John C., Zachary H., @edit_room, Matthew Y., Christopher L., Krizna W., Sayan P., Neha S., Zachary H., Joyce S., Mauricio M., @shrenicshah, Panos T., Dhruv R., Maria A., Ter B., oiSnowy, Evan T., Dan M., Jon T., @twblanchard, Aurie, Christopher M., @unplugged_wire, Giacomo S., Gully F. for the questions that led to this piece! Ask your own question on Twitter using #AskASpaceman or by following Paul @PaulMattSutter and facebook.com/PaulMattSutter.