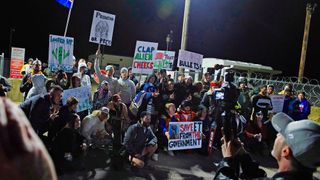 Would-be alien-hunters gather to "storm" Area 51 at an entrance to the military facility near Rachel, Nevada, on September 20, 2019.
(Image: © Bridget Bennett/AFP/Getty)

Aliens of all stripes are zeroing in on the secretive Area 51 this weekend.

The installation has been the focus of numerous conspiracies involving the base's extraterrestrial connection — a locale for captured flying saucers and surely an alien holding site.

The target dates of September 20-22 will see several activities, including "Storm Area 51, They Can't Stop All of Us."

Related: Area 51 Exists! But Where Are the Aliens?
More: 15 Far-Out Facts About Area 51

The town of Rachel is an unincorporated portion of Lincoln County, Nevada. As the closest habitation to the Nellis Air Force Range and Area 51, the area has become a Mecca for inquisitive UFO believers.

The town is roughly three hours drive north of Las Vegas along Nevada Highway 375, also called the "Extraterrestrial Highway." Rachel is home base for Little A'Le'Inn that has been selling tickets for "ALIENSTOCK."

Be forewarned: There is no gas available in Rachel. Incoming alien hunters are urged to fill their tank in Alamo/Ash Springs from the east or Tonopah from the west.

Related: Alien Hunter Explains Why He Won't Be Going to Area 51

Getting heavy with Bud Light

Meanwhile, instead of storming a secretive government base, the Downtown Las Vegas Events Center is partnering with Collective Zoo and Bud Light to host an evening of top-secret entertainment on Thursday, September 19 with the Area 51 Celebration.

"The time has come to sit back, share a beer, and talk all things aliens," exclaims the associated website. "Come in peace, we have everything you need to make this celebration a blowout, including a classified lineup of music artists specially curated by Collective Zoo."

Matty Roberts, the man behind the virtual "Storm Area 51" movement has been abducted to host the alien-themed event in downtown Las Vegas.

Overall, there's no telling how many are truly expected to populate the Area 51 festivities. As of this posting, it remains unclear what events may have been cancelled or are still planned in light of an alien free-for-all, even legal fights over events.

In the meantime, for those wishing to storm a highly-classified military base, UFO devotees are being warned that any gate-crashing is a no-no and will be deterred.