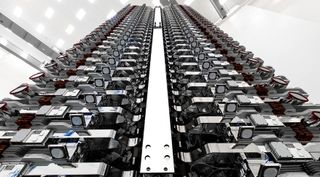 A stack of Starlink satellites being prepared for launch. A five percent failure rate for the first set of 60 satellite has heightened concerns that megaconstellations could leave hundreds of dead satellites in long-lived orbits.
(Image: © SpaceX)

WASHINGTON — The failure of at least five percent of the first batch of SpaceX Starlink satellites has put a spotlight on the growing concerns that satellite megaconstellations could litter low Earth orbit with hundreds of dead satellites.

SpaceX said in a June 28 statement that three of the 60 Starlink satellites the company launched May 23 are no longer responding to commands from the ground and appear to be dead. The company said those satellites will deorbit naturally, burning up in the Earth’s atmosphere.

SpaceX had stressed prior to the launch that these satellites were, in effect, experimental, and had a higher risk of on-orbit failures as the company demonstrates their key technologies. Launching them into lower orbits ensures they should deorbit in a matter of a few years.

At the Secure World Foundation's Summit for Space Sustainability here last week, government and industry officials said they were concerned that proposed megaconstellations of thousands of satellites could, with similar failure rates, leave hundreds of dead satellites in low Earth orbit, a particular concern at some of the higher altitudes proposed for those systems where it can take centuries for satellites to naturally deorbit.

Those first-generation satellites were designed to operate seven years, but in some cases lasted three times as long. Yet, nearly a third suffered in-orbit failures and cannot be deorbited. "We’ve created, inadvertently, using highly reliable components, almost 30 percent rocks in space that will be up there a long time," he said.

That 30 percent failure rate is for the company's original fleet of 95 satellites. "It freaked everybody out to launch 95 satellites" back in the 1990s, he recalled. "Now, of course, we look like slackers."

Holger Krag, head of the space safety program office at the European Space Agency, noted in a June 25 talk at the meeting that many satellite operators aren’t adhering to guidelines that call for deorbiting satellites within 25 years after end of life. He found that only 30 percent of operators were implementing proper post-mission disposal of their spacecraft.

"This is not enough," he said. Current trends in the growth of space objects, including satellites and debris, is little different than if operators took no measures at all to mitigate space debris. "We need to get much better."

There was no shortage of ideas for doing so presented at the meeting, ranging from active debris removal to shortening post-mission disposal times to the use of failsafe automated deorbit systems that would remove satellites from orbit even if they suffer a mission-ending anomaly.

One speaker, Didier Alary of the University of Toulouse, suggested the creation of an "eco-tax" similar to fees charged in some countries to cover the recycling of appliances, in this case charged to satellite operators based on the number of satellites and how they adhere to sustainability guidelines. The funds collected from such taxes would go towards efforts to remove space debris.

While there wasn't clear support for that proposal, Desch was among those calling for a regulatory regime to improve space sustainability, saying that industry likely wouldn’t be able to self-regulate. "As long as there’s a set of rules that everybody has to follow, that's not unusual," he said. "I think they should be international in scope and everybody has to follow them, and if you don't, there might need to be penalties or something."

Desch did praise SpaceX for seeking and winning Federal Communications Commission approval to operate much of its Starlink constellation at 550 kilometers, versus 1,150 kilometers as originally planned. SpaceX said it lowered the satellites to reduce latency, but at that lower altitude the satellites will naturally deorbit within five years without propulsion.

"One of the greatest moves made in the last two or three months on this whole issue is SpaceX deciding to lower its altitude," he said, while acknowledging there were reasons beyond space sustainability for operating at a lower orbit. "I'm just thrilled they made that decision. It's a very responsible decision."