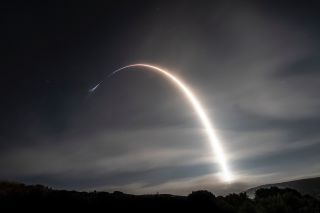 SpaceX's final launch of the Iridium Next communications constellation has been pushed again, according to the satellite company, with liftoff now targeted for no earlier than Jan. 11.

The launch had most recently been targeted  for Tuesday (Jan. 8) according to Iridium CEO Matt Desch, although SpaceX itself had not yet announced that date. SpaceX announced on Jan. 6 that the Falcon 9 rocket due to carry the final 10 Iridium Next satellites completed a static-fire test. The same tweet noted that Iridium and SpaceX had yet to settle on the best launch date to target.

That was followed by silence until Monday (Jan. 7), when Desch posted on Twitter that SpaceX was hoping to launch on Friday (Jan. 11), with Jan. 12 as a backup, pending approval from the launch range. (The rocket will blast off from Vandenberg Air Force Base in California.) SpaceX communications staff had not responded to a request for more information before this story was published.

"Iridium-8 update: Briefing from SpaceX makes me increasingly encouraged about a Friday launch," Desch wrote. "Weather in the morning doesn't look too bad right now, and the rocket should be ready. Think I might stick around for this historic event at 15:31 UTC (7:31 PST) on 11 Jan!"

The Iridium Next constellation requires an instantaneous launch window in order for the satellites to properly reach their orbits. In later tweets, Desch added that the weather forecast for Friday morning presented in a SpaceX briefing seemed reasonably favorable.

During a news conference held last week by Iridium, Desch emphasized his faith in SpaceX despite launch delays. The upcoming launch will be the eighth partnership between the two companies and will bring the total constellation to 66 working satellites and nine backups in orbit.

"It has been an exciting road with SpaceX," Desch said. "We just keep finding a way together to solve problems and keep moving forward."