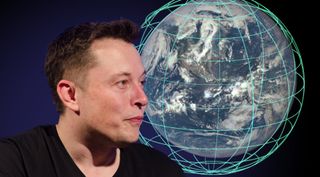 SpaceX has the FCC's approval to launch some 4.425 satellites, but will have to do so within nine years.
(Image: © SpaceNews)

WASHINGTON — U.S. telecom regulators the evening of March 29 accepted SpaceX's application to reach U.S customers with a megaconstellation of 4,425 broadband satellites, but denied the company's request to relax the deadline by which it must have its entire constellation in orbit.

SpaceX is the fourth company the FCC approved to launch a new non-geostationary (NGSO) satellite constellation after opening up a new processing round in 2016. Other companies approved are OneWeb for 720 satellites in low Earth orbit, Telesat Canada for 117 satellites in low Earth orbit, and Space Norway for two satellites in highly elliptical orbits. Last month FCC Chairman Ajit Pai urged other commissioners to support SpaceX's application, arguing it would help bring internet access to rural and underserved areas of the United States. [SpaceX's 1st Starlink Satellites Are Working Fine]

SpaceX will have to launch at least half of its constellation of Ku- and Ka-band satellites within six years of today, per the agency's recently revised rules, or its authorization freezes at the number of satellites in operation at that date. The FCC in September relaxed its deadline, giving operators nine years to launch their full constellation, but even those rules are stricter than what SpaceX would refer. The launch-provider-turned-satellite operator asked the FCC for an okay to launch 1,600 satellites in six years — just over a third of its full constellation.

SpaceX said the FCC's deadline was "impractical" and that it could start broadband service without the full constellation. The FCC said no, but gave SpaceX permission to re-submit a waiver request in the future. SpaceX said in October it plans to start service with 800 to 900 satellites.

SpaceX's constellation is the largest of all the applicants, generating concern about its potential to enshroud the Earth in a cloud of space debris. Fleet operators OneWeb, Spire, SES and Space Norway all expressed concern about how SpaceX will protect the space environment when operating so many satellites. But weighing more heavily with the FCC was NASA, which said a constellation as large as SpaceX's likely needs to meet more stringent standards than what NASA recommends for de-orbit reliability. NASA's reliability standard is that at least 90 percent of satellites can deorbit properly after their mission is complete.

The FCC said it agrees with NASA that "the unprecedented number of satellites proposed by SpaceX and the other NGSO [fixed satellite service] systems in this processing round will necessitate a further assessment of the appropriate reliability standards of these spacecraft, as well as the reliability of these systems' methods for deorbiting the spacecraft." As such, the agency said its approval of SpaceX's application is conditioned upon "approval of an updated description of the orbital debris mitigation plans for its system."

SpaceX said it will deorbit its satellites within one year of completing their mission, well ahead of the 25-year guideline suggested by NASA and other leading space agencies.

The FCC rebuffed petitions from fleet operators Telesat and Viasat to reject SpaceX's application on the grounds the constellation poses a radiofrequency interference threat to other satellites. SpaceX used software from the International Telecommunication Union to gauge equivalent power flux density limits (EPFD) for its constellation. The FCC said it conditions constellation approval "on SpaceX receiving a favorable or 'qualified favorable' rating of its EPFD demonstration by the ITU prior to initiation of service."

SpaceX launched its first two prototype satellites in February as a secondary mission with the Paz radar satellite for Spanish operator Hisdesat. SpaceX founder and CEO Elon Musk plans to use the Starlink constellation to generate revenue that will support his aspirations to colonize Mars.