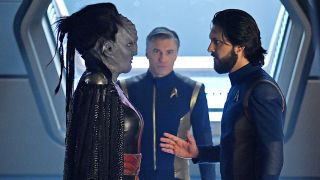 ATLANTA — Members of the "Star Trek: Discovery" cast entertained fans at DragonCon last month, providing anecdotes from their time on the show and discussing plans for the future. Members of the cast participated in panels on three of the convention days.

Mount, who grew up in Tennessee, said that it was strange being there as a speaker as he had always wanted to attend DragonCon. The visit took on an extra note of strangeness since many of the DragonCon attendees often dress as their favorite characters.

"It's even weirder to see people walking around dressed as me," Mount said during the Friday session.

Related: 'Star Trek: Discovery' Season 3: What We Know and What We Hope For

The decade-old "Star Trek" franchise is rich with history, and the actors said that they feel it keenly when they are both on and off the set. Peck in particular felt the strain as he questioned his ability and worthiness to participate in such an established community.

"I was at my first makeup test in Toronto and was like, I hope I get fired," Peck said.

Spock's appearance on the show in Season 2 began with the lead character, Michael Burnham, portrayed by Sonequa Martin-Green, finding the usually stoic half-Vulcan emotional inside a cave on Vulcan. Trying to figure out how to portray Spock during that time was "really scary and deeply emotional," Peck said. "I felt so exhausted after those days."

But the actor said he was fortunate that the hardest days came first, and he has begun to feel more comfortable in the role. He spoke about a time in the original series when Kirk tells Spock that he made a great computer; Spock took the comment as a compliment.

"I took that to heart," Peck said.

Peck also found himself changing as he settled into his role. "Spock really taught me about finding that good balance between logic and emotion."

For Latif, the hardest physical part of his role came the first day that he was dressed as a Klingon. The extensive makeup meant that he couldn't eat and could barely move.

"That was an awful, awful day," Latif said.

"I have a lot of respect for the actors who play Klingons because of the amount of work you have to put in," Mount said. In addition to the makeup, actors must also be able to speak Klingon. Chieffo said that she had to spend a lot of time drilling with a translator to be able to speak the fictional foreign language.

"I could literally buy books on Amazon and read the whole history of the Klingon empire," she said.

At what point did the actors become more at ease with their roles? Latif said he felt like he got going during Season 1's fourth episode, "The Butcher's Knife Cares Not for the Lamb's Cry." "That's when everything started to make sense," Latif said.

During the episode, Voq and L'Rell experience a bonding moment whose chemistry may have sparked the writer's willingness to expand on the romantic possibilities between the two Klingons.

"Looking into a Klingon's eyes for real was a very weird thing," Latif said.

Although the actors don't have any real say in how their scenes are written, Chieffo thinks the dynamic between her and Latif may have encouraged the writers toward shifting the tone of their relationship. However, she was quick to note that they weren't directly conversing with the minds that write the script.

"We're energetically getting on the same wavelength," she said.

Although they are thrilled to be a part of "Discovery," the actors are continuing to work on other projects. "Age of Resistance," a prequel to 1980s classic movie "The Dark Crystal," was released the same day the actors spoke at DragonCon, and Latif served as a voice for one of the gelflings.

Peck has a recurring guest role in the show "Penny Dreadful: City of Angels." He also said that he played the role of Reed Richards, aka Mister Fantastic, head of the Fantastic Four, in Marvel's new podcast series "Marvels." The 10-episode podcast series should be released on multiple platforms in 2020.

Chieffo will be doing a reading of what she calls a "two-hander reversed Frankenstein" in the play "Analog," opening in Los Angeles in October.

"I'm a Franken-created AI. It's a steampunk thing I'm excited to read," she said.

She will also be playing the traditionally male role of Ensign Iago in a virtual-reality miniseries called "Operation Othello," which is based on Shakespeare's "Othello."

Chieffo also raised the idea of helping to flesh out the diversity of stories being presented in media, a process that she says "Discovery" helped her with.

"It has empowered me to create more, to be a champion of the stories I want to see," she said. The opportunity to play a flawed, nuanced female character "makes me want that to be the norm."

When asked if that meant she had plans to direct in the near future, Chieffo said, "I'm on the verge, guys!"

After listening to his fellow stars list their upcoming work, Mount deadpanned, "I've been pressure-washing my siding."

He went on to say that he worked with Anthony Hopkins on the movie "The Virtuoso," where he served as producer. He's also voicing a couple of things in animated space that he said contracts won't allow him to discuss. And he's continuing to work on "The Well," his podcast about creativity and inspiration.

Serving as part of the "Star Trek" crew comes with more than a few surreal moments. Mount said it really kicked in the first time he sat in the captain's chair and performed role call.

Another exciting moment came after shooting a battle sequence on the bridge of the starship Enterprise. Usually, Mount said, the cameras and other theater equipment off camera serve as a distraction and make it feel like a set. That day, however, he said he turned to Peck and asked, "Do you feel like you're in Star Trek?"

Chieffo said that she doesn't generally see herself while fully made up as a Klingon. However, one day she was walking by the camera and saw herself. "I grabbed the director and was like, that's me! He was like, 'Yeah.'"

"Moments like that are pretty surreal and wonderful," she said.

Then there are the moments when the stars met the stars of "Star Trek" past, particularly those involved in "The Next Generation."

Peck raved about meeting Jonathan Frasier. "Meeting him is a thrill," he said. "He's just such an amazing caretaker of the world we are all a part of now."

Mount said that TNG's Data was his absolute favorite "Star Trek" character. "He's Pinocchio in space!" At one point, Brent Spiner, who played the android, climbed in the car after a "Star Trek" event and told Mount, 'I'm the biggest hell-on-wheels fan.' "I didn't know what to say," Mount said.

Coincidentally, Mount had met Patrick Stewart, who played Capt. Jean-Luc Picard, years before while in graduate school. A mutual friend introduced the two while Stewart was performing "'The Tempest"' on Broadway. "I was so petrified," Mount said.

He asked Stewart what his plans for the future were.

"He said, 'I think I want to do Macbeth twice, once to really f--- it up and then to do it correctly,'" Mount said, doing a great impersonation of the British actor.

"I thought to myself, 'Oh, that's dedication,'" Mount said.

All four members of the cast repeatedly said that they were honored to be part of the "Star Trek" story, particularly as part of the most diverse crew in the universe.

"The beauty of Trek being over 50 years old is that you see that it's always been groundbreaking, but you see there's so much more ground to break," Chieffo said.

The actors said they don't know if there are any spinoffs coming, as the decision is made by those higher up.

"We can safely say we have no idea, but we're hoping," Peck said.

Walking through Star Trek space has been incredible for the four actors.

"Just having been able to join this franchise, this world, as a kid who grew up watching 'Star Trek' — it's been an amazing experience," Mount said.

Hear Peck and the rest of the cast when the 10-episode podcast series is released this fall on Stitcher Premium and other podcast platforms in 2020.