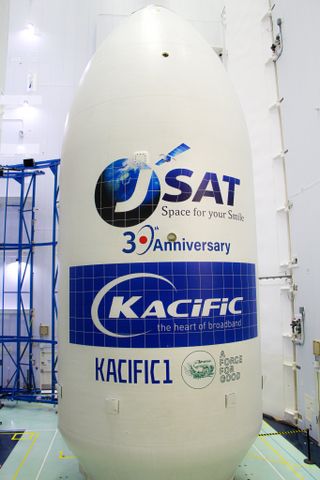 CAPE CANAVERAL, Fla. — SpaceX fired up a twice-used Falcon 9 rocket Friday (Dec. 13), setting the stage for the launch of a a hefty next communications satellite into space next week.

SpaceX conducted the Falcon 9 test at Space Launch Complex 40 at Cape Canaveral Air Force Station here ahead of a planned launch on Monday (Dec. 16). The two-stage Falcon 9 will carry the JCSAT 18/Kacific 1 commercial communications satellite into space. Liftoff is scheduled for sometime during a planned 88-minute launch window on Monday from 7:10 p.m. to 8:38 p.m. EST (0010-0138 GMT Tuesday).

Static fire test of Falcon 9 complete—targeting December 16 for launch of JCSAT-18/Kacific1 from Pad 40 in FloridaDecember 13, 2019

Friday's occurred at about 1:20 p.m. EST (1820 GMT), when the Falcon 9 rocket roared to life, as smoke billowed from its engines during the preflight test. The brief ignition, known as a static-fire test, is a standard part of prelaunch procedures and one of the last major milestones before liftoff.

During the test, the rocket's first stage is held down while its engines are briefly fired, allowing crews to ensure that all systems are working properly and that the rocket is ready to fly. Shortly after the test, SpaceX tweeted that the it was a success and that the company planned to launch on Dec. 16.

The booster supporting this mission previously supported the CRS-17 and CRS-18 missions pic.twitter.com/BDtOZOxZ9JDecember 13, 2019

Tucked inside the rocket’s nose cone is a massive communications satellite that will provide broadband coverage to Japan and the Pacific Islands. Built by Boeing, the 15,335-pound (6,956-kilogram) satellite will maneuver itself to a spot in geostationary orbit, 22,00 miles (36,000 kilometers above the Earth’s equator, after it separates from the Falcon’s upper stage.

“Kacific1 will deliver high-speed broadband services to previously unserved or under-served people in nations where populations are widely dispersed, and therefore expensive to connect,"company officials said in a news release. "Many of these nations are archipelagos or have rugged mountain ranges and large rural territories, making satellite technology the best – and sometimes only – way to connect to the internet and phone networks."

The services provided by the satellite will be especially beneficial to health and education workers in provinces and villages across the South Pacific. Additionally, the broadband access will provide critical communications channels to a region which is often ravaged by natural disasters, such as earthquakes and tsunamis.

This flight marks the 13th of the year for SpaceX and the second in under two weeks. The last time a Falcon 9 took to the skies, it carried a fresh batch of cargo to the space station on Dec. 5.

The star of Monday’s launch will be a veteran Falcon 9 booster, which previously hoisted two different Dragon cargo capsules as part of CRS-17 in May and CRS-18 in July. Approximately 8 minutes after launch, SpaceX intends to land the rocket's first stage on one of the company's two drone ships, Of Course I Still Love You, which will be stationed in the Atlantic Ocean.